There are comics that are card-carrying “science comics” that teach science (eg, Boxplot by Maki Naro) and express truths about the experience of being a scientist (eg, Piled Higher & Deeper by Jorge Cham). There are those that are super-nerdy all the time, like xkcd by Randall Munroe.

Then there are the comics that occasionally brush up against the scientific world – dropping a punchline that hints at larger concepts, drawing in those who understand and inviting inquiry from those who don’t. This strip from Diesel Sweeties by Richard Stevens 3 is part of that tradition.

Yesterday, our friends at the Berkeley Science Review published “Behind the Science: Infinite Russian Cats: Part 3 of Several” by Daniel Freeman, which appears, at first, to be nothing more than an infinite series of subtitles. It turns out, however, to be an insightful post that explains the central challenges that the Schrodinger’s Cat thought experiment addressed, illustrated with a Science Caturday joke that may already be in Brian Malow‘s set. It also does an excellent job of explaining the fundamental weirdness of quantum mechanics:

What’s interesting, though, is that Quantum Mechanics is correct, and matter absolutely can be interpreted as existing in simultaneous states, up until being “looked” at—this formalism allows us to calculate all kinds of absurdly precise quantities about atoms and molecules.  Reconciling whywe don’t ever see alive-dead cats (that is, macroscopic objects made of trillions of atoms simultaneously in more than one state) with the notion that reality does really follow these rules (that is, microscopic objects being describable as existing in simultaneous states) is actually incredibly nontrivial. END_OF_DOCUMENT_TOKEN_TO_BE_REPLACED 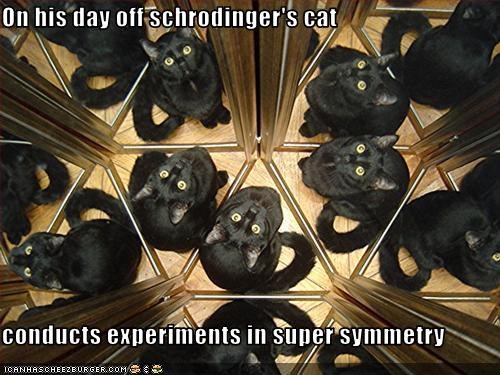 For a kitty that might be dead, he sure keeps busy.

What’s better than a science lolcat? (OK, besides two science lolcats)  A blog filled with adorable and informative physics kitty cartoons, that’s what. I recently stumbled upon The Adventures of Schrodinger’s Cat, a webcomic blog by an anonymous physics student from Madrid. Besides the classic dead-or-alive thought experiment, the charming cartoon cats explore a wide range of topics in physics, including quantum mechanics, relativity, optics, and string theory.

Learning stuff with cute kitties is what Science Caturday is all about. You can also get updates at The Adventures of Schrodinger’s Cat Facebook page. 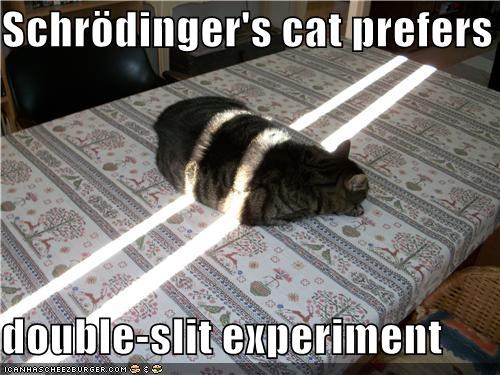 Dead or alive? Wave or particle? Kittehs handle all the tough physics questions.