There was a time when travel was sleek and sophisticated (and inaccessible). Frank Sinatra sang about flying. I remember finding an old PanAm in-flight service menu my grandfather ha kept in his attic. There was real food that you might actually want to eat. The newest installments in the NASA/JPL Visions of the Future poster series invite us to imagine travel across our solar system and the galaxy with nostalgia for the optimism of mid-20th Century travel and hope that the future of space exploration is sexier than The Martian. 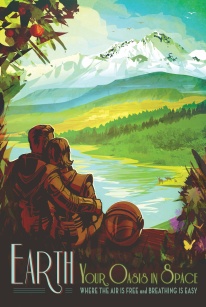 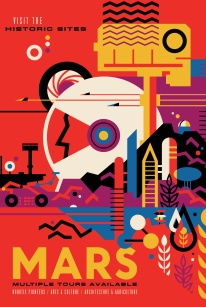 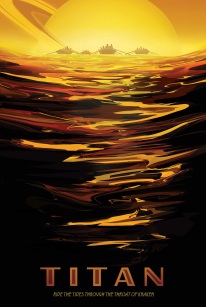 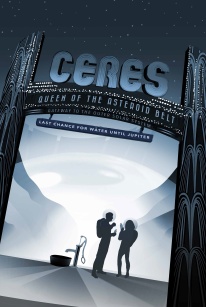 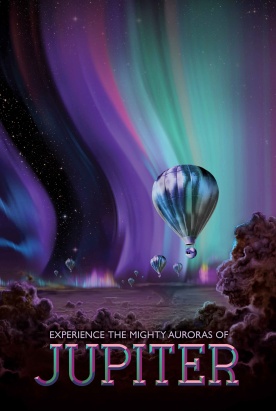 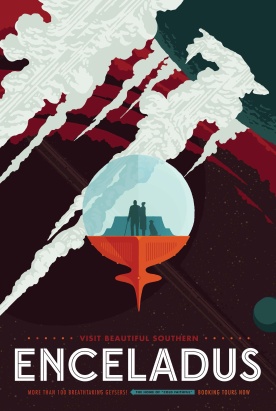 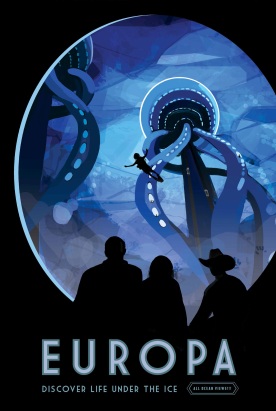 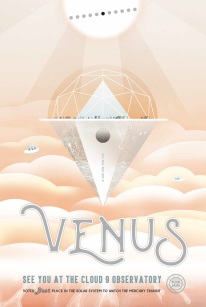 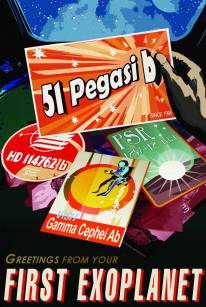 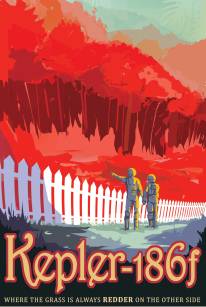 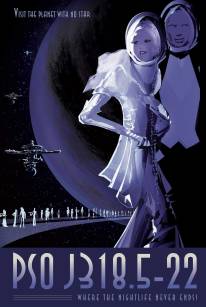 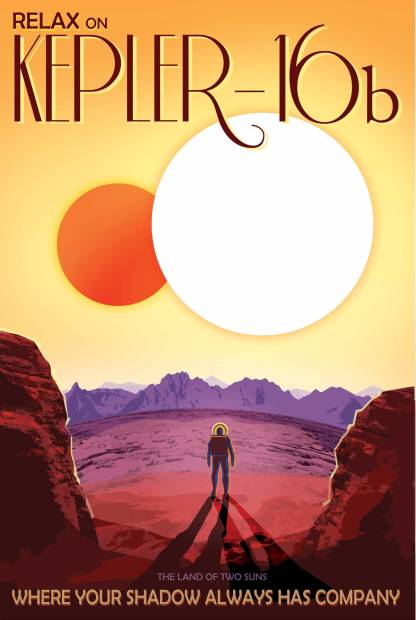 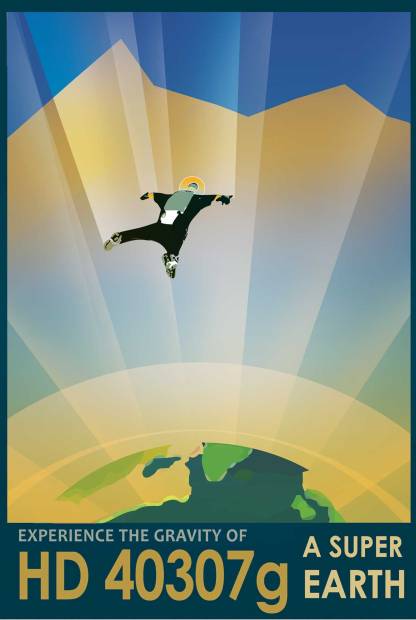 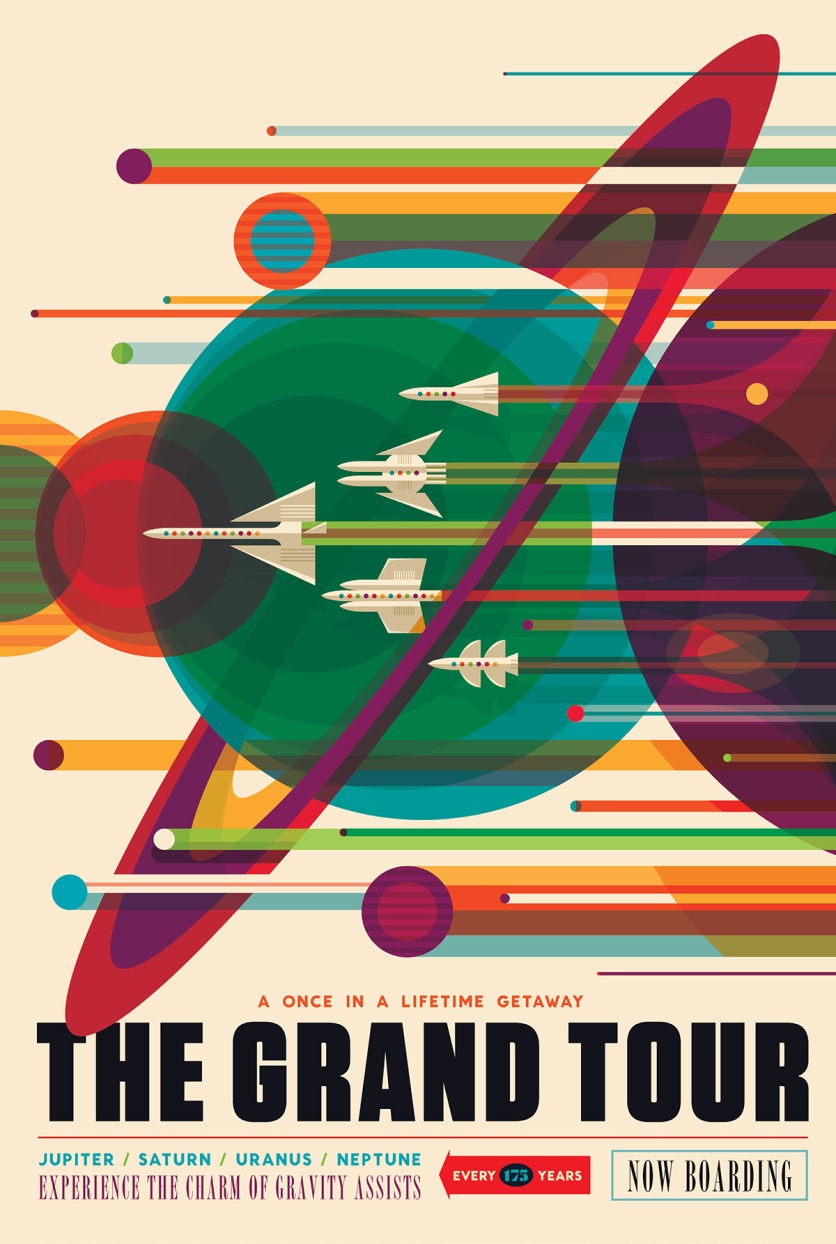 I’ve written before about Philip Beesley’s immersive installations, so I was delighted to learn that the National Academies of Science was bringing one to their headquarters in Washington, DC.  Last week, I had the opportunity to see it on a special tour with Beesley, and to hear him speak on a panel at NAS that night. The installation is called Sentient Chamber, and it looks a bit like a cross between an open-air tent-style church and a ghostly Rose Parade float. Beesley describes it as an “experimental architecture and sculpture installation [which] acts as a test-bed for ongoing research that combines the disciplines of architecture and visual art, computer science and engineering, and synthetic biology.” It’s silver and white, and as you come close it clanks and beeps in a friendly way, shimmying its fronds and extending slender robotic fingers.

The main structure consists of a flexible grid made up of many triangular shaped elements in metal and plastic. Beesley explains that the shapes of the structure are based on hyperbolic geometry, which creates maximum strength from minimum materials. Above and among the arches are clusters of “acoustic and kinetic mechanisms” – microprocessor-driven fronds and branches that reach out and whirr and clank and light up when people interact with them. Fruit-like clumps of glass globes and tubes contain what Beesley describes as “the beginnings of a synthetic biology system” – oils that react to each other and to changes in the environment.

Beesley is an amazing talker, ranging from the concept of a structure as a box or a “raindrop” to metal-rod cores and distributed mechatronics within a single breath. But he returns often to a central theme – the idea of a new approach to shelter that is gentle and designed to be responsive to and integrated with nature, rather than an attempt to keep natural forces at bay with thick walls and high-tech climate-control systems.

He dreams rather about building gathering places that breathe, that learn, that welcome both humans and nature, and that are resource-positive – that is, generating energy and other resources rather than just conserving them. Although his Sentient Chamber at NAS is not ready to live in – it’s full of fragile pieces and there are laptops nestled in the treetops – it conjures up tantalizingly novel ideas about how we could live in the future. If you can, go see it now.

Have you ever wondered what makes Michele Banks tick? Nature Microbiology did. So, they asked her. You can read their interview with Michele here and gaze upon her lovely artwork for their homepage here.

Nature Microbiology: When did you first become exposed to scientific images?

Michele Banks: I started doing watercolours about 15 years ago. I was mainly working in pure abstraction, just playing with colour and with the properties of the paint. One of the things I love to do is wet-in-wet technique, which gives a ‘bleeding’ effect. I showed some of my wet-in-wet work at the Children’s National Medical Center here in Washington DC about 10 years ago, and they told me they liked my work because it looked like things under a microscope.

We hope the interest in the overlap of science and art will be a theme that continues throughout future Nature Microbiology issues – also open access, gender balance in publishing, shying away from bogus impact factors. etc. etc…

It’s a long way to Kilpisjärvi. This is essentially true wherever you start. In my case, I left Washington, DC about 5pm on Friday and arrived in Kilpisjärvi about the same time on Sunday, having traveled by plane, train, bus and car. At each stage of the journey, I left my usual mode of life farther behind.

The airplane part of the trip was only noteworthy for the huge contrast in the style of airport security between the Nordic countries and the United States. Last week, when I traveled to Chicago for the Society for Neuroscience meeting, I was patted down, swabbed for bomb residue and questioned by TSA agents at both BWI and O’Hare. In transit at Reykjavik, by contrast, the immigration guy took a quick glance at my passport photo, decided it was probably me, and nodded me on. After I retrieved my bag in Helsinki, I simply walked through the door marked “nothing to declare”.  I will think wistfully of this experience every time I hear someone say that Obama wants to turn the US into Europe.

From Helsinki airport, you can take a subway train right into the center of town. But first you have to descend deep into the bowels of the earth, on no fewer than four escalators. (This is probably to avoid disturbing the trolls. Finland is apparently full of trolls, and not the internet kind.) Once in town, I met some twitter friends, Janina and Tommi, who took me for lunch and showed me the beautiful library at The University of Helsinki.

Then it was time to get on the overnight train to Rovaniemi, the capital of Finnish Lapland. The train is very comfortable, with two decks of berths with cute little bunk beds. In the summer, the view from the top is probably beautiful, but because it gets dark early in the autumn, I couldn’t see much.

On the train, my first Stupid Foreigner Problem (SFP) struck. The train made many stops, but there were no station announcements, so as not to wake sleeping passengers. Since the route continued beyond Rovaniemi, how would I know where to get off? I had also cleverly planned my trip to coincide with the very day that clocks go back in Finland for daylight saving, complicating the issue of arrival time. Fortunately, the train had great WiFi (since 2010, Finland has classified internet access as a legal right), so I was able to tell from Google Maps when we were arriving in Rovaniemi and get myself safely off the train.

Rovaniemi is supposed to be the true home of Santa Claus, and has a theme park devoted to all things Santa.   On this particular Sunday morning, however, it was gray and rainy and everything was closed, so I hopped on the bus to Kilpisjärvi without regret. There were four passengers. After two hours or so, the other three got off, and I continued to Kilpisjärvi alone with the friendly bus driver.

We stopped for a lunch break in Muonio, where I had been advised to eat in the local Thai restaurant. As Muonio is basically a one-intersection town, it was easy to find. Alas, on a rainy Sunday in the off-season, the cook had not prepared any Thai food, so the other customers (both of them) and I made do with tea and pastries, which we ate to the discordant accompaniment of loud Asian pop music. The adjoining visitor center and gift shop offered reindeer hides for 149 Euros.

I saw my first small herd of reindeer almost immediately outside Rovaniemi! Then some more. Then a couple more reindeer. Then a few more reindeer crossing the road. The driver, who called reindeer “the local mosquitoes,” told me there are 8,000 reindeer vs. vehicle accidents a year in Lapland. Apparently reindeer are not very smart.

The driver told me that the local Sami people use every part of the reindeer – not just the meat and hides, but also the bones and antlers, from which they make tools. He said that they even grind up the hooves for medicine.

“What kind of medicine?”

“Medicine for men. You understand?”

I understood, but even so, he clarified further. “It makes the stick stand up!”

I hadn’t even arrived in Kilpisjärvi yet, and I had already learned so much.

This was my four-year-old’s “To Do” list. I think she gets it. 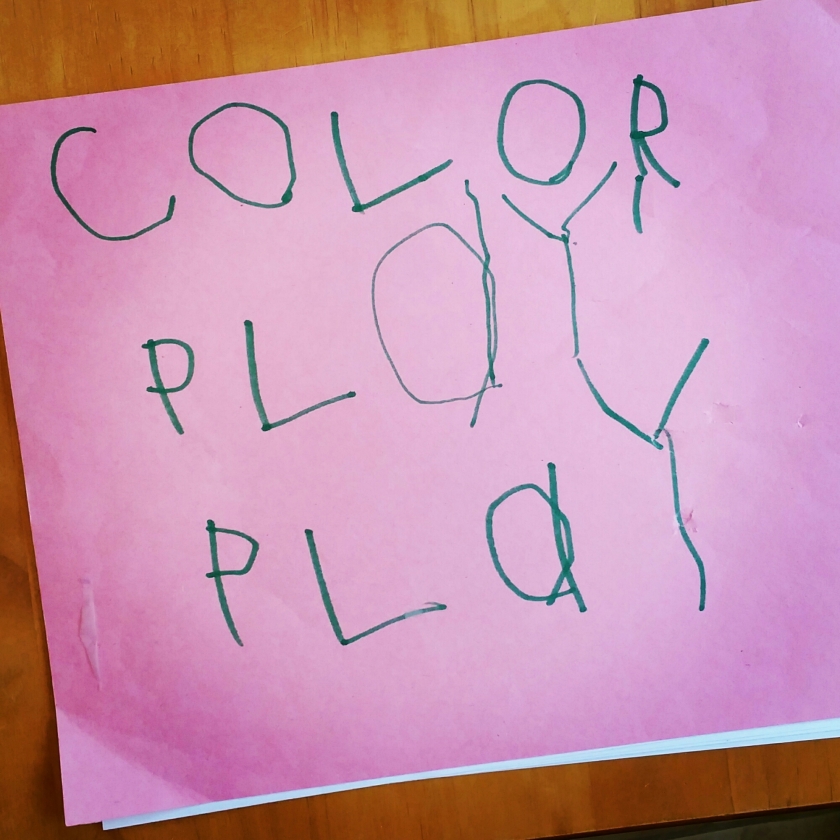 Unfortunately, investing in her life coaching sessions is not cheap*.