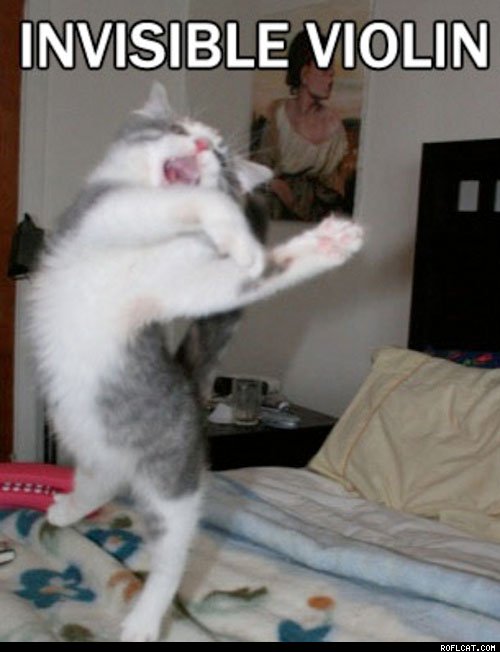 This week’s mythbusting prize goes to researcher Claudia Fritz of the Sorbonne, who led two studies, both of which revealed that despite their mystique, antique “master” violins – even Stradivari – produce no better sound quality than modern instruments.

In a piece in National Geographic  Phenomena, Ed Yong walks readers through the stages of Fritz’s research, involving a number of different testing protocols, and her findings, which ultimately indicated that professional violinists found no difference in sound quality between old instruments and new.

Of course, our classically-trained kitty will tell you that her particular invisible violin sounds much better than that screeching monstrosity next door.

NEW LINKONOMICON ENTRY: “Where Do Baby Sea Turtles Go During Their Lost Years?” by Ed Yong in Not Exactly Rocket Science at National Geographic Phenomena

Ever wonder where baby sea turtles go to grow up – those awkward middle years between hatchlings racing through a seagull flock of attrition and being nearly impervious adults?

My kids have. Until now, I had to tell them “I don’t know.” Not just because I didn’t know, but because no one really knew. There were guesses, but there wasn’t evidence.

Read Ed Yong’s great piece at National Geographic Phenomena to hear the clever way researchers from the University of Central Florida collected data to back up (mostly) some well-reasoned hypotheses. 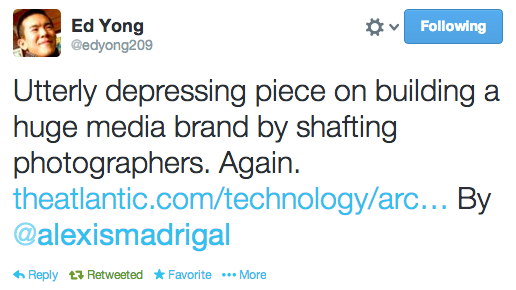 Ed Yong’s comment on Alexis Madrigal’s article at The Atlantic is spot-on.

Can you spot the fundamental flaw in the logic of self-justifying logic of the owners of @HistoryInPics*?

“Photographers are welcome to file a complaint with Twitter, as long as they provide proof. Twitter contacts me and I’d be happy to remove it,” he [Xavier Di Petta] said. “I’m sure the majority of photographers would be glad to have their work seen by the massives.”
-from “The 2 Teenagers Who Run the Wildly Popular Twitter Feed @HistoryInPics” by Alexis Madrigal

If you don’t tell people who took the pictures, how do the photographers benefit from having their work seen by the “massives”? Sure, having one’s work make an impact is a reward unto itself, but it doesn’t pay the bills.

When our artists can’t pay their bills, we get less art. Or as the internet would say,  “This is why we can’t have nice things.”

*In general, I avoid linking to folks that are making their bank on the backs of uncredited artists.

via Mark Frauenfelder at BoingBoing

I told you so