In an open letter to Rush Holt (PDF – 974KB), the CEO of the American Association for the Advancement of Science (AAAS) and executive publisher of Science, Representative Jackie Speier (D-CA) writes:

Women who speak out about these incidents have been subjected to torrents of online abuse, including rape and death threats. Female scientists from underrepresented minorities, already a small group, have been subjected to even more vociferous abuse and have received limited support from scientific institutions…At the beginning of the 21st century, while we are in the midst of exploring the solar system, unlocking the human genome, and creating ever-more-advanced technology, the demographics and attitudes of scientists and engineers must not be trapped in the 19th century.
–Representative Jackie Speier

One of the things that was made apparent in the revelations about Geoff Marcy’s assaults on students was that our inherited culture of institutionalized science has favored protecting those in power over protecting those without. In many ways, the AAAS represents the scientific legacy of the United States. Representative Speier notes some missteps in Science that reflect that destructive culture.

The AAAS also has the opportunity to represent the future of science – a future that is inclusive and prioritizes the humanity of all. Representative Speier also notes the recent editorial by Bernard Wood in Science that chastises his fellow established scientists for failing to substantively address misconduct in their own ranks as a small step in the correct direction.

The third “A” in AAAS stands for “Advancement”. Representative Speier is asking the AAAS to recognize that overcoming its sexist heritage is a critical issue for the advancement of science into the 21st Century.

If you wonder why Twitter seems to have no interest in protecting individual users from harassment, maybe you need to think about how the companies that pay for the annoying “promoted” tweets think about  negative online behavior (UPDATE: It has been pointed out that McCaffrey doesn’t address harassment per se or what may differentiate this from “hating on”). For example, here is HBO director of development Kathleen McCaffrey on the Nerdist Writer’s Panel having an honest discussion* how their social media and marketing teams think about Internet “haters” with host Ben Blacker:

McCAffrey: The thing about Girls which is kind of amazing is the haters. And it makes our social media team very happy because they just put one thing out and people come out of everywhere and just start to hate on it. And, so, it is very loud and very strange…just so many people hate it…

Now, bear in mind that the hating on it she refers to will invariably include negativity directed not just at HBO and the show, but at the individuals involved in creating the show:

McCaffrey: but on social media – on Twitter and everywhere – Lena is very polarizing and people love to hate on her. It still surprises me…

Blacker: But, but that’s, that’s good for you, because it’s a loud conversation and it means that the people who do love her will probably come out to defend her.

McCaffrey: Yes. It becomes this weird fight that she’s kind of even not really a part of, like the people around her just yelling about her. It’s very strange and fascinating.

*McCaffrey expresses disappointment with the continuing negative reaction, while acknowledging the utility of the reaction for marketing.

On the Pop My Culture podcast, actor Josh McDermitt described his first audition scene for the role of Eugene on The Walking Dead.

…I was taking to a girl. We were both backstage about to give this big presentation in front of, like, the world’s top scientists about some, you know, medical breakthrough we just had; and I’m backstage talking with her and I’m, like, berating her and, like, telling her how stupid she is, and then, and then, I try to sleep with her…

The scene, although fiction, rings very true, because this scene happens – not always in such a confined time frame, with those particular details, or with that intensity – but the aggression, denigration, and sexual objectification of women in science is ever present.

The focus of the description is on how the abuse of the female character illustrates flaws in the male character, because the description of the scene exists to illustrate the process of auditioning for a specific character. In real life, however, should we be more concerned with the character of the jerk or the life experience of those who have such behavior directed at them? As Janet Stemwedel notes in her column in Forbes on Tim Hunt’s controversial comments:

What if, when asked to say a few words to the Korean women scientists and the science journalists at the luncheon, he had recognized the audience he was speaking to was likely to have had quite different experiences in science than he had?

A few months ago I wrote a blog post in response to Williams and Ceci’s paper in the Proceedings of the National Academy of Science: National hiring experiments reveal 2: 1 faculty preference for women on STEM tenure track. I was concerned about the way that the findings were interpreted, generalized and compared to the wider literature. In the media comments that followed their piece, Williams and Ceci were very clear, however, that they felt that critics of the paper were being unfair and unscholarly. I didn’t agree and I wanted to ensure that genuine scholarly concerns were discussed not only in a blogged and public venue but also through traditional channels. So I wrote a letter to the editor, expressing the concerns raised in my blog post.

I think Rosie Redfield’s dual work in criticizing NASA’s arsenic life paper both on her blog and through a letter to Science, for example, is a very important model. High visibility science, reported in large media venues, often doesn’t receive public critique. People may write letters to the editor or complain to each other at conferences, but too often that critique is not available to most of the people who have read about a story in the news. Or it is only available so long after the initial results are reported that it has little impact on how that science is understood publicly. As I’ve written before, the back channels of criticism of cold fusion were quickly refuting the findings, but those of us reading about it on the sidelines were left out of that conversation for a long time. Blogged commentary and social media responses are a very important way of making all of science–including the messy processes that go into building scientific consensus about a topic–available.

The editors of PNAS weren’t entirely moved by my letter and declined to publish it. The letter and the editor’s comment are below. Even though it wasn’t published, I’m still happy to have worked to express my concerns both publicly here and through the more formal channels of the journal. This is an important model for scholarly critique, and I would do it again in heartbeat.

Editor’s Remarks to Author:
While interesting we do not feel this adds weight to the discussion.

The recent article by Williams and Ceci [1] addresses an important issue: identifying precisely where women leave or are shut out of scientific careers. The results of their study suggest that when hypothetical faculty candidates are identical except for gender, women may be favored at the point of hiring. Within the constraints of experimental research of this type, their study addresses a meaningful and specific literature gap. In a context like this, however, where findings will contribute (and are explicitly intended to contribute) to public discourse and policy making, the interpretations of the evidence and the implications that are drawn are of at least equal importance. So it is especially troubling that, in this article, the interpretations stretch well beyond the experimental evidence.

The experiment is framed with two base assumptions: that hiring bias is the most prominent explanation for women’s underrepresentation and that fear of hiring bias is a key motivator for women to withdraw from seeking tenure-track positions; neither is compellingly supported. On the latter assumption, no evidence is provided that hiring bias is a central worry for women despite claims such as “One reason (for fewer applicants) may be omnipresent discouraging messages about sexism in hiring”. In reference to the former claim (“The underrepresentation of women…is typically attributed, both in scientific literature and in the media, to sexist hiring”) the evidence provided is contradictory and weak. Of all of the literature they cite in support of this claim only one study [2] examines this type of hiring bias. Sheltzer and Smith [3], for example, examined the employees of elite labs and found fewer women employed there. They, however, are appropriately tentative in their interpretation saying explicitly that they have no evidence to suggest or negate hiring bias and they propose multifactorial explanations for their observations. Similarly, the 2010 American Association of University Women report “Why so Few? Women in Science, Technology, Engineering, and Mathematics” [4] is used to support the claim that “numerous blue ribbon panels … have concluded that implicit, and sometimes explicit, attitudes pervade the hiring process“; but on hiring bias, which it addresses only briefly, the report references the same National Research Council (2010) report that the authors cite to support their own findings. This report concludes that women declining to apply for tenure track jobs is a more pressing issue than bias at the point of hiring.

Gender-based hiring bias, as a factor isolated from the many other day-to-day experiences that influence women’s participation and progression, is not the dominant explanation for women’s underrepresentation in the literature. That hiring bias may not (under experimental conditions) be a barrier to women on the tenure track is therefore just one of many contributions to understanding a complex phenomenon. There is little to support the far-reaching conclusion that, as a result of these findings, this “is a propitious time for women launching careers in academic science”. A great deal more nuance and tentativeness in interpretation would have been appropriate.

Barbie dolls are not real people. The pictures of actors and models in magazines are barely real people (thanks to Photoshop). The actress in this car commercial is not a real scientist. 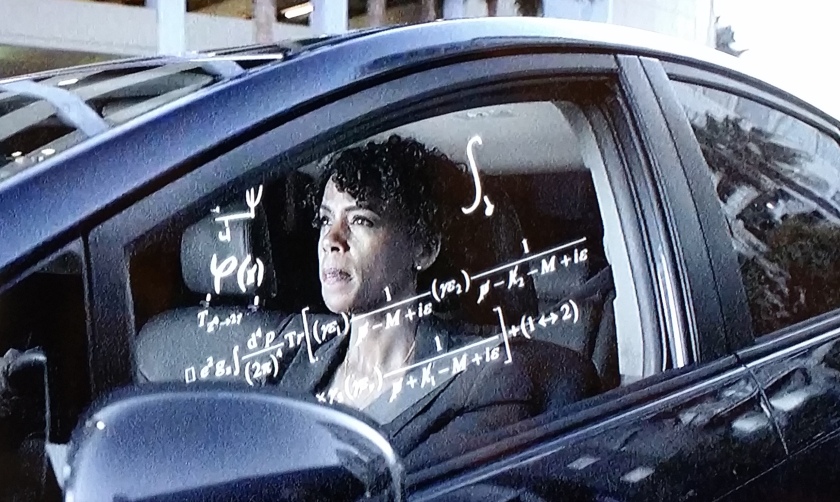 It does, however, show anyone watching commercials during the NCAA Men’s Basketball Tournament a stylish woman of color driving a nice car and doing complex-looking mathematics* in her head.

It shows someone who is not white, not male, not bearded, not with crazy hair, not with disheveled clothes, not with sub-par social skills doing complex-looking mathematics* in her head.

As we increasingly recognize that recruiting and retaining a diverse STEM workforce requires presenting individuals in that field with whom they can identify, we have a car company showing us that. This actress may not be a real scientist, but my four-year-old daughter won’t know that her concepts of who can be a scientist will have been expanded positively by a commercial while Daddy watched Duke play basketball on TV.

*I do not have the gift for going “oh, that is X equation” on sight. So, I will leave it up to you, dear readers, to evaluate the actual complexity and accuracy of the mathematical imagery.