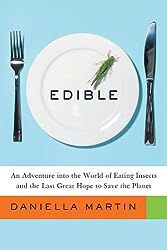 This week, they’re looking at the environmental impacts of foods we eat, and others that we should. They’ll speak to Daniella Martin, host of the insect cooking/travel show “Girl Meets Bug,” about her book “Edible: An Adventure into the World of Eating Insects and the Last Great Hope to Save the Planet.” And they’ll talk about the environmental effects of salmon farming with Peter Bridson, Aquaculture Research Manager for the Seafood Watch program at the Monterey Bay Aquarium (which has appeared in Eva Amsen’s Have Science Will Travel series).


*Josh provides research help to Science for the People and is, therefore, a completely biased and cooperative member of the team.

The character Doc in John Steinbeck’s novel Cannery Row is based on marine biologist Ed Ricketts, who had a small lab in Monterey.

This fact was one of the first things I learned when I took a behind the scenes tour at the Monterey Bay Aquarium, located on Cannery Row. The aquarium is housed in former Hovden Cannery, which was an active cannery until the early 1970s. Now, the entire neighbourhood of Cannery Row has been converted to a tourist destination, and the former canneries are shops and restaurants. And an aquarium.

There is a more direct connection between Ed Ricketts and the aquarium: The layout of the aquarium, grouping species in exhibits based on their natural ecosystem, was informed by Ricketts’ work Between Pacific Coasts.