Voyage of Discovery, an art exhibition I created together with Jessica Beels and Ellyn Weiss, will reopen on Thursday for a two-month run at the McLean Project for the Arts in McLean, VA.

The artwork in Voyage of Discovery has its roots in the idea of a journey of scientific exploration, in the tradition of Darwin, Wallace, and the thousands of scientists who constantly travel the globe in search of new findings. This imaginary voyage takes viewers to a polar region where the iconic, seemingly eternal, landscape of ice and snow is in profound and rapid transition due to climate change.

The pieces in the show – ranging from ink paintings to wire and paper and wax sculptures to a massive 30 foot fabric installation – reflect our artistic responses to the transformation of land and sea as the planet warms. The show looks at many aspects of climate change – not only the obvious, like the melting of glaciers and the thawing of permafrost, but also more subtle effects, like the movement of previously unknown species and microbes into the Arctic and the dramatic shift of the color of the land from white to green to black.

Voyage of Discovery, which ran for 5 months at the American Association for the Advancement of Science earlier this year, will open with a reception and gallery talk this Thursday, from 7-9 pm, at the McLean Project for the Arts’ Emerson Gallery, at 1234 Ingleside Avenue in McLean. (details here)

As a special bonus for science fans, the reception takes place on the same day that renowned science writers Carl Zimmer and Sam Kean are speaking in the same building as part of “Fall for the Book”. Their talk starts at 7:30.  So if you arrive at 7, you can take in the art, have a glass of wine, and then go downstairs and hear more about some fascinating science. Win-win.

The passenger pigeon, a thriving species in the United States at the beginning of the 19th century, was extinct by the end of it. As Carl Zimmer wrote in National Geographic:

“In 1813, while traveling along the Ohio River from Hardensburgh to Louisville, John James Audubon witnessed one of the most miraculous natural phenomena of his time: a flock of passenger pigeons (Ectopistes migratorius) blanketing the sky. “The air was literally filled with Pigeons,” he later wrote. “The light of noon-day was obscured as by an eclipse, the dung fell in spots, not unlike melting flakes of snow; and the continued buzz of wings had a tendency to lull my senses to repose.”

When Audubon reached Louisville before sunset, the pigeons were still passing overhead—and continued to do so for the next three days. “The people were all in arms,” wrote Audubon. “The banks of the Ohio were crowded with men and boys, incessantly shooting at the pilgrims… Multitudes were thus destroyed.” (source)

Done in by a combination of over-hunting and habitat loss, the passenger pigeon is now the subject of study by a group of scientists, led by Stewart Brand, George Church and Ben Novak, who hope to revive the species through genetic engineering and cloning. (This article gives a brief explanation of the science involved)

The idea of reviving any extinct species is fraught with practical and ethical issues. (Here’s an interesting post about a few of them) So where, you ask, does art come into this issue? Well, when it comes to this particular species, what image of the passenger pigeon you look at might just color your opinion of whether we really want this particular bird back.

If you look at Audubon’s painting of a pair of billing passenger pigeons, one sleek, beautiful bird leaning down and appearing to kiss its mate on the bough below, you might just think, “Yes! Those are nice. We should bring back those birds.” Now look at Walton Ford’s 2002 painting, Falling Bough, (top) and read his description of it:

“The passenger pigeons were the most numerous birds that ever lived in the history of the planet. It’s almost disturbing how numerous- billions upon billions of birds. It was a fecundity that was almost disgusting. I started thinking about a blame-the-victim kind of attitude you could take to that…to make it seem like they had it coming, that there was this disgusting empire of birds and that it was corrupt like Rome…that it was bound to fall. So I invest the passenger pigeons with every kind of sin that I can imagine. And the bough, this gigantic branch, is falling under their tremendous weight. Meanwhile they go about their bickering and their lusts and foibles and all the disgusting things that they are doing.” (source)

Obviously, the artists had different goals: Audubon aimed to provide an accurate visual record of the passenger pigeon’s physical characteristics, while Ford set out to conjure a dramatic, violent fantasy. The reality of giant flocks of passenger pigeons undoubtedly fell somewhere in between these extremes. They were likely to have been somewhat more frightening, noisy and dirty than Audubon’s, but less menacing and dangerous than Ford’s. I recognize this, but I saw Walton Ford’s painting first. The image stuck. So I say no, no, no, don’t bring back these birds. At least not to any trees near me.

This week, tech writer Virginia Heffernan caused a stir by publishing an essay entitled “Why I am a Creationist“. Here at the Finch & Pea, we believe that everyone is entitled to their opinion, but when it comes to explaining stuff, we put our trust in Science Cat (and his friend Chemistry Cat), and leave Ceiling Cat to looking pretty and keeping mice out of the attic. 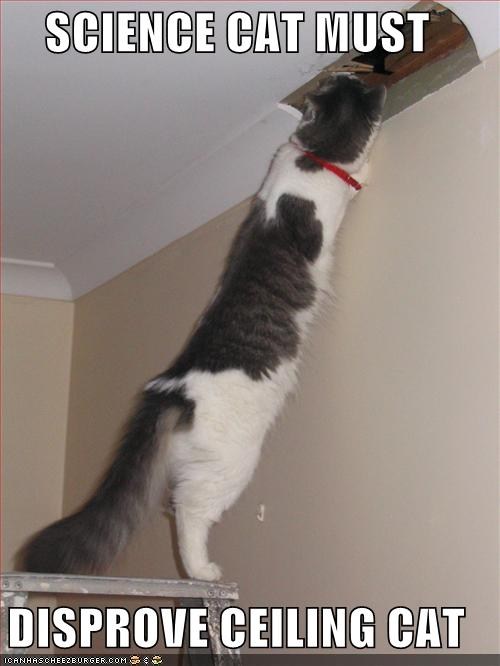 François Jacob, a pioneer in our understanding of the regulation of gene expression, passed away on Friday. His work with Jacques Monod was foundational to much of the work in my PhD thesis lab and inspired our approach to understanding splicing regulation in my post-doctoral lab. Like many true insights, his realization about a basic mechanism of biology was so basic and fundamental that seemed like the kind of thing we must have known all along. Maybe we did, but until François Jacob we didn’t know we knew it.

Carl Zimmer tells the story of Jacob’s moment of insight:

In the darkness of the Paris movie theater, Jacob hit on an answer. The repressor is a protein that clamps on to E. coli’s DNA, blocking the production of proteins from the genes for beta-galactosidase and the other genes involved in feeding on lactose. A signal, like a switch on a circuit, causes the repressor to stop shutting down the genes…Perhaps these circuits are common in all living things…But when François tried to sketch out his ideas for his wife, he was disappointed.

“You’ve already told me that,” Lise said. “It’s been known for a long time, hasn’t it?” – Carl Zimmer

So, I had to take some time off from the juggling routine to go do awesome things like visit Venezia* with the lovely spouse and sleep in a room with a view of the Grand Canal and Santa Maria della Salute.

I also learned, via Carl Zimmer, that juggling will make my brain even beefier and more awesome than before.

*Being the 21st Century, it seems like high time we get around to calling people’s cities what they call them. That’s just good manners.

Error: Twitter did not respond. Please wait a few minutes and refresh this page.

Error: Twitter did not respond. Please wait a few minutes and refresh this page.