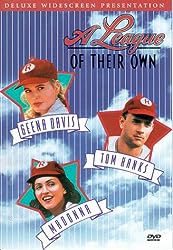 The sciencing of A League of Their Own  (#ALabofTheirOwn) reminded me a bit of the sciencing of Conan the Barbarian (#ConanthePostDoc). Both films have great scripts, with great lines; but most people only remember one or two. People other than me do not have the scripts burnt into their souls.

That is ok. In fact, it is better than ok. As Jimmy Dugan says to Dottie Hinson:

It’s supposed to be hard. If it wasn’t hard, everyone would do it. The hard… is what makes it great.

It was not easy, but I think we found a few gems that speak honestly to the practice of science now.

Some of the lines were so relevant that observers mistook them for actually commentary.

One would hope that a movie about women playing baseball in the 1940s would not be relevant to science today.

The #ALabofTheirOwn storify makes up for its lack of quantity with some real quality, but I’m biased.

One thought on “A Lab of Their Own”