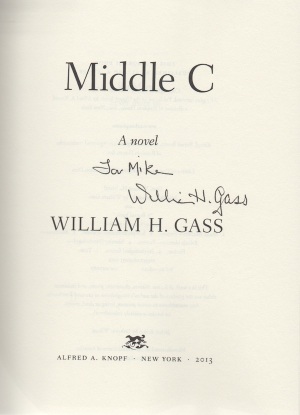 Last Tuesday I made my way to Left Bank Books, a St. Louis favorite, to listen to William Gass read from his newest book, Middle C

. As some readers may know, I am a fan, or maybe even a connoisseur of post-apocalyptic fiction; thus Gass really caught my attention when he read one of the most searing scenes of apocalypse survival I’ve ever encountered, something that makes most works in the post-apocalyptic genre seem exuberantly upbeat.

While this scene is not written as a poem, it is one long sentence written with the attention to cadence and sound that you expect of poetry, and so it qualifies for this week’s Sunday Poem. As for a possible science-related theme, aside from the association I see with my favorite subgenre of science fiction, this passage from Middle C describes the narrator’s speculation that the human species will somehow, despite losing Armageddon, squeak through with its fundamental biological drive to reproduce intact.

The context is this: Joseph Skizzen, a professor of music at a small Midwestern college who has faked his C.V., has been worrying a sentence about human extinction which once popped into his mind:

The fear that the human race might not survive has been replaced by the fear that it will endure.

Each revision of the sentence is the launching point for a riff on the theme.

Mostly, I’m looking for an excuse to present something by a remarkable writer, author of one of the darkest books I’ve ever encountered (his 1995 The Tunnel), and of some of the most jaw-dropping English sentences found in contemporary fiction. Squeamish readers should know that what follows is quite brutal. Other readers might get angry. This is not a disclaimer, I do not disclaim, but I’m giving you fair warning.

If you’re in the St. Louis area, Washington University is featuring an exhibit on Gass this spring that is worth your while to check out.