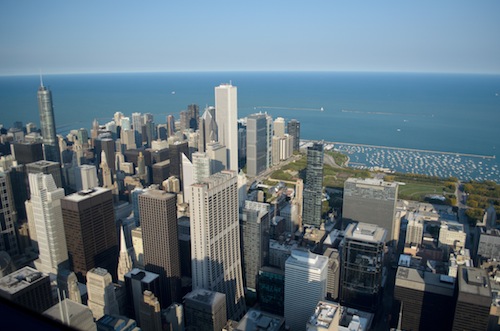 I just got back from a weekend in Chicago, where, among other things, I stood on a three-inch thick glass ledge, suspended a quarter of a mile above Chicago’s streets. The Sears Tower* is a symbol of the optimistic view of technological progress that was still common in the mid-20th century – an era of outsized, iconic engineering projects. Chicago’s history reflects both this optimistic view, and more ambivalent attitudes towards technology and cities, captured in today’s Sunday Poem, Carl Sandburg’s 1904 “Chicago”.

To introduce this poem, I’ll pass the mic to William Cronon, who writes of what Chicago meant to the development of the American West:

“My contention is that no city played a more important role in shaping the landscape and economy of the midcontinent during the second half of the nineteenth century than Chicago… During the second half of the nineteenth century, the American landscape was transformed in ways that anticipated many of the environmental problems we face today: large-scale deforestation, threats of species extinction, unsustainable exploitation of natural resources, widespread destruction of habitat. It was during this period as well that much of the world we Americans now inhabit was created: the great cities that house so many of us, the remarkably fertile farmlands that feed us, the transportation linkages that tie our nation together, the market institutions that help define our relationships to each other, and the natural world that is our larger home.”1

* In an act that demonstrates the cluelessness and inflated sense of self-importance that seems to be common among the financial mega-elite, the long-time name of one of the world’s major, modern architectural icons was changed recently, but we’ll pretend that didn’t happen.