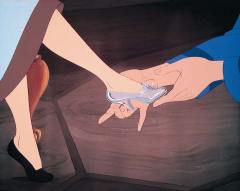 This is important. Well, really, it is trivial; but, in the context of the film, it is really important to a fictional, animated, exploitive dictatorship.. The royal proclamation announcing The Great Slipper Screen reads (emphasis added, by me, of all people):

All loyal subjects of his Imperial Majesty are hereby notified by royal proclamation that in regard to a certain glass slipper, it is upon this day decreed that a quest be instituted throughout the length and breadth of our domain. The sole and express purpose of said quest is as follows to wit: That every single maiden in our beloved Kingdom shall try upon her foot this aforementioned slipper of glass, and should one be found whose foot shall properly fit said slipper, such maiden will be acclaimed the subject of this search and the one and only true love of his Royal Highness, our noble Prince. And said Royal Highness will humbly request the hand of said maiden in marriage to rule with him over all the Land as Royal Princess and future Queen. 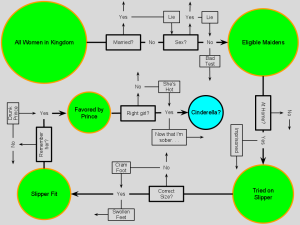 In Cinde-really 4: The Great Slipper Screen, we talked about the hypothetical screening protocol that the Grand Duke should have been following. The text of the royal proclamation makes it clear that they are:

The future Queen of the realm (assuming she accepts the Prince’s proposal) will be the first girl whose foot fits the glass slipper. Legally, the Grand Duke never found a maiden “whose foot shall properly fit said slipper” as “said slipper” had shattered on the floor of the Wicked Step-Mother’s house.

What should the Grand Duke think? For starters, he may want to be both cynical and skeptical.

The proclamation mentions the glass slipper1 and, as his assistant appears to be Gaston’s morally challenged sidekick Lefou from Beauty and the Beast, the Grand Duke should probably also worry that families might have bribed my assistant to get information about the slipper. . The Grand Duke could reasonably assume that a number of households might try to create/find the matching slipper that they can produce after “accidentally” breaking the glass slipper2.

On the other hand, he has a few good reasons to believe that the slipper Cinderella produces is the other glass slipper. It is glass. It is tiny. It goes on her right foot (she lost the left slipper when fleeing the ball). It looks just like the other one. In addition, the Grand Duke saw the girl with whom the Prince was danced. Even though the Cinderella that tried on the wrong glass slipper was in her working clothes, the Grand Duke was in a position to judge that the girl in front of him could be the girl for whom he was looking.

These are the theoretical considerations. Our Grand Duke is confronted with a practical problem that needs a practical solution. What would I do if I were the Grand Duke3?

NOTES
1. Fans of Encyclopedia Brown will know that this was a huge mistake.
2. That’s right. In my newest Cinderella rewrite entitled If the Slipper Fits…, our Cinderella never goes to the ball. There is no Fairy Godmother and the Wicked Step-Mother is Keyser Soze-esque in her ruthless scheming.
3. What would you do if you were a subject of the kingdom where I was the Grand Duke? What you should do is move. You know my sense of humor. This isn’t an issue as long as I am a powerless blogger, but humor plus power (POWER! POOWWERR!)? YIKES! I shall leave you with the advice of Zazu from The Lion King:

If this is where the monarchy is headed count me out.
Out of service, out of Africa, I wouldn’t hang about.