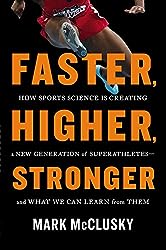 This week we’re exploring the ways that science and technology are changing sports, on and off the playing field. We’ll speak to journalist Mark McClusky about his book Faster, Higher, Stronger: How Sports Science Is Creating a New Generation of Superathletes – and What We Can Learn from Them. We’ll also get the scientific perspective on sports supplements with Dr. Bryan Chung, founder of Evidence Based Fitness.

This has been making the rounds, but Dale Hansen GETS IT. That’s something I almost never say about sports journalists, including when they are opining about the sport on which they are supposed to be an expert.


The fact that Michael Sam’s sexuality has been this newsworthy – that we haven’t had an active, openly non-heterosexual NFL player until 2014 – is quite damning of NFL culture and American culture in general.

*Hat tip to Jen Hayden at The Daily Kos.

According to a paper from Marshall Jones of Penn State in Psychology of Sport and Exercise (you can read it for only $31.50), home field advantage is far more prevalent in subjectively judged, independent sports, like diving and gymnastics, than in objectively judged sports, like sprinting and the biathlon.

Subjectively evaluated sports such as diving, gymnastics, or figure skating usually show sizable and significant home advantages. Otherwise, occasional findings have been reported but they are not consistent within a sport, are generally weak, and often statistically unreliable. – Marshall Jones

Taking together, this suggests that home field advantage is a result of the crowd intimidating the officials, not the crowd boosting the morale of the home team.

Here are my thoughts on the Seahawks-Packers Hail Mary refereeing controversy (as if you really cared):

This is a repost of an article that originally appeared at The Paltry Sapien on 10 August 2012.

American football. Not proper football. We already fixed that once. We call it rugby.

Speaking of which, we were at a dinner party when the subject of my rugby career was brought up (not by me). A discussion about surviving a full contact sport without padding (don’t hit with your head and hit with forces below the physiological limits of the human body) transitioned into a discussion of how to reduce debilitating injuries in American football.

And, helmets and pads are necessary for the single most important element of modern American football: the forward pass.