The zoo, founded in 1826 is in the middle of London, but in one of its rare open spaces: Regent’s Park. It’s not a very large zoo, but the zoological society of London has a second – much larger – zoo outside the city, which is where the elephants are. At the moment, the lions are also temporarily out of the city, while they’re getting an awesome new enclosure.

When I was in high school, I did a mini literature research project about zoos, and learned that they have four key functions: entertainment, research, conservation and education. Since then, whenever I visit a zoo, I look for those four roles. London Zoo, perhaps unfortunately, relies very heavily on entertainment. Its Zoo Lates programme, allowing visitors to party in the zoo after hours, has been criticised for being stressful to animals. But on the other hand, the zoo’s popularity also saved it from closing in the 1990s. As a whole, though, the Zoological Society of London, which runs both London Zoo and Whipsnade Zoo, does do a lot of work on animal research and conservation, so the superficial entertainment value of London Zoo is a bit misleading.

In the three times I’ve visited London Zoo in the past two years, I also noticed that it’s currently undergoing a lot of improvements that all create more space or better enclosures for animals. Yay! The most recent one is the new lemur exhibit. It’s not as great a space as the Apenheul or Duke Lemur Center lemurs have, but much better than the old lemur cage (which you can briefly see in the 2013 video at the bottom of this post).

As part of the launch of the new lemur exhibit, the zoo’s website also has a lemur game, where you can let a lemur jump from tree to tree. (Unless you are as bad at platform games as I am, in which case the lemur just does one jump and falls to the ground. I’ll leave the jumping to real lemurs.)

Lest we turn this into the Lemur & Pea blog, let’s move on to this anteater.

This little guy was new to the tropical rainforest exhibit when I visited, and was just as curious as the visitors were. He has free reign of both the animal and people parts of the exhibits, but was still learning to deal with crowds and had two human babysitters (anteatersitters?) with him.

We also visited the penguins, and the exhibit about penguin research. This group of penguins was recently featured in The New Yorker, in an article by Ed Yong, discussing their wobbly walk. Just another example of the “research” function of zoos! 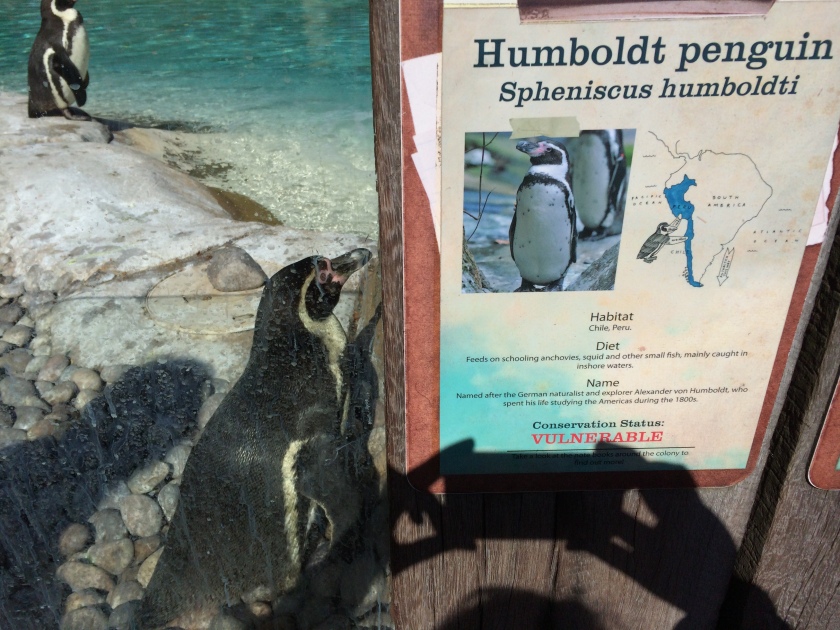 Even with a relatively small zoo as London Zoo, I still have never managed to visit ALL animals in one day. I’ll be back next year to visit the new lion enclosure, and here’s a video from my visit two years ago:

Last month I went to the Netherlands to visit family. I didn’t just get to see my immediate family, but also some more distant relatives: the inhabitants of Apenheul Primate Park.

Here’s a selection of the many photos I took that day.

END_OF_DOCUMENT_TOKEN_TO_BE_REPLACED

The aye-aye (Daubentonia madagascariensis) is the very definition of narsty. A nocturnal solitary lemur so weird that it is not only the sole living species in its genus, but also the only member of its family. They lead a solitary existence and try to avoid mirrors, because when you’re this ugly you don’t need a reminder.

Beyond their homely looks, these guys have rodent teeth and the creepy-best middle fingers ever.

Watch this National Geographic video to see them in action:

If you want to learn more check out the Duke Lemur Center website, but do yourself a favor and plan to visit this place to see the aye-aye and other lemurs.

“Meet the…” is a collaboration between The Finch & Pea and Nature Afield to bring Nature’s amazing creatures into your home.