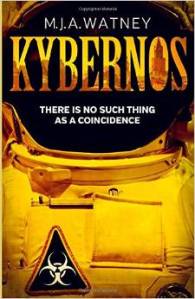 Lately I’ve been reading enough SF from small independent presses for a review series. And so over the next few weeks it will be Indy SF Month here at The Finch and Pea, which will include one of the recent nominees for this year’s Philip K. Dick award, a fascinating, non-horror zombie apocalypse from one of my new favorite small presses, and a collection of fascinating stories by a long-time local (St. Louis) SF author.

First in line is M.J.A. Watney’s Kybernos, a self-published work that was a quarter-finalist in 2014 Amazon’s Breakthrough Novel Award competition. Watney provided me with an ARC of this intriguing work, which, like a good fraction of the indy SF we’ll discuss in the upcoming weeks, is better described as speculative rather than science fiction.

Kybernos is part of a tradition of SF stories that play with the direction of time, not time travel so much as questions of reversibility and causality. Hard SF usually comes to mind when we think of this theme – Gregory Benford’s great classic Timescape explored the idea of trying to change the present by sending messages to the past via tachyons, faster-than-light particles that travel backwards in time. Unlike Timescape, Kybernos is not hard SF, but it explores some of the same questions about alternate time trajectories and the reversal of cause and effect. END_OF_DOCUMENT_TOKEN_TO_BE_REPLACED 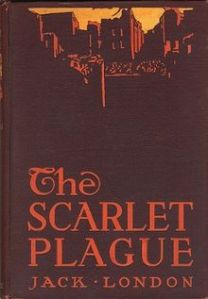 We’re all familiar with classic scenes of a brutal post-apocalyptic world like this: A group of refugees from the pandemic is holed up in an abandoned building with a cache of food and arms, firing on a gang of assaulting raiders. Or, a former professor of English Literature, clad in goat skins and huddled around a fire, is telling his dirty, illiterate grandsons about life before civilization vanished.

Today these scenes are standard fare in post-apocalyptic fiction, from The Road to The Walking Dead. But when Jack London wrote them a century ago, they weren’t. The genre itself had been around for a long time, and many of the classic themes, settings, and catastrophes had already been introduced. However, nobody before Jack London had described a collapse of civilization so violent or an aftermath so squalid. In the century since, images of a gritty and brutal world in ruins have become almost a requirement in this genre. END_OF_DOCUMENT_TOKEN_TO_BE_REPLACED 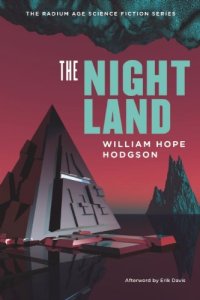 Back in 1805, the French priest de Grainville wrote what could be considered the first Dying Earth novel. Despite many obvious science fictional elements, Le Dernier Homme was a religious fantasy, inspired by the pseudo-biblical style of Milton’s Paradise Lost. Scientist-prophets fulfilled God’s will by conquering nature with science, but in the background was an invisible world of mystical spirits who were part of God’s master plan.

A century later, a quirky British poet produced another major dying earth vision by flipping this formula: he brought the mysticism to the foreground, and put the science in the background, creating a completely secular and much darker vision of earth’s final era. William Hope Hodgson’s The Night Land, a flawed beast of a book, is a milestone in the genre — a forerunner not only of now-classic Dying Earth fantasies by Jack Vance and Gene Wolfe, but also of psychologically refracted post-apocalyptic visions like Galouye’s Dark Universe and Dick and Zelazny’s Deus Irae. END_OF_DOCUMENT_TOKEN_TO_BE_REPLACED 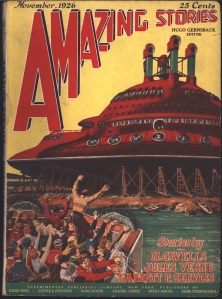 1912 was a good year for science fiction — according to some, it was the best year. Certainly for pulp science fiction, it was a landmark year. Although the first dedicated pulp SF magazine, Amazing Stories, wouldn’t appear for more than a decade, two of the foundational texts of pulp SF were published in 1912: Edgar Rice Burroughs’ A Princess of Mars, which began as the serial “Under the Moons of Mars” in February, and Hugo Gernsback’s Ralph 124C 41+, whose last installment was published in March.

Another contributor to this early pulp ferment, less memorable than Burroughs or Gernsback, was the American journalist Garrett Serviss. Serviss was a popular science writer who had also written an 1898 sequel to Wells’ War of the Worlds, featuring an invasion of Mars led by none other than Thomas Alva Edison. The Second Deluge, serialized in 1911-12, is a pulpy, early instance of a classic storyline that crops up over and over again post-apocalyptic fiction: Noah’s Ark. END_OF_DOCUMENT_TOKEN_TO_BE_REPLACED 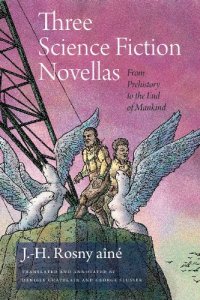 As I wrote when I first began this series on post-apocalyptic science fiction, what makes this genre so compelling is how its writers put our mastery of nature up against the possibility of human extinction. The extinction of a species is a routine event, and has been for the entire history of life on earth. So what about us? Will our species eventually disappear, or will our mastery of science and technology protect us from nature’s ruthless assaults?

This theme is beautifully explored by one of the early masters of science fiction, the Belgian writer J.-H. Rosny aîné. Rosny, whose career began in the 1880’s and ended with his death during the Campbellian Golden Age, can be considered the father of hard science fiction because, as his translators argue, unlike Verne or Wells, he “was the first writer to allow science to write his narratives” from a “neutral, ahumanistic” perspective.

In this way, Rosny is much like the scientifically realist Camille Flammarion; but unlike Flammarion, Rosny’s purpose is novelistic rather than didactic. The result is fiction that is as compelling as that of Verne or Wells, told in a detached, analytic style that makes Rosny’s voice unique in early SF. This voice has a powerful effect in The Death of the Earth, a ruthless evolutionary vision of human extinction, in which our species cedes the planet to a completely new form of life. END_OF_DOCUMENT_TOKEN_TO_BE_REPLACED