During the new wave of future fiction of the last decades of the 19th century, stories of catastrophic future wars were especially popular. The trend began in 1871 with George Chesney’s “The Battle of Dorking”, a story about a surprise invasion of England by something that sounds like the Prussian military. Writers continued to present increasingly elaborate visions of ever more destructive weaponry right up through the outbreak of World War I. And then there was H.G. Wells, who in 1898 took this popular and overworked late-Victorian genre and completely transformed it into modern science fiction with the classic story of alien invasion.

Swapping Martians with Germans isn’t the only feature that makes The War of the Worlds so different from what came before. Most writers were largely interested with the military and geopolitical aspects of future war, but Wells was interested in the civilians. In fact, War of the Worlds isn’t really about the Martians or their advanced technology; it’s about our cosmic insignificance, and how we react when the security of civilization is demolished.

Everyone knows how the story goes. Astronomers observe some odd flashes of light on Mars. Some time later, mysterious cylinders crash into the countryside around London, which turn out to carry blood-drinking Martians and their giant fighting machines. They begin to lay waste to London, smashing the pitiful human military resistance, until the Martians suddenly succumb to a terrestrial disease for which their alien immune systems are unprepared.

A QUESTION OF COSMIC INSIGNIFICANCE
Wells’ narrator is recounting the story six years after the invasion, in a world that has been transformed by the experience. “No one would have believed in the last years of the nineteenth century that this world was being watched keenly and closely by intelligences greater than man’s, and yet as mortal as his own.” The great achievements of civilization in Victorian Britain left people unprepared to think that, from a cosmic perspective, humans are no different from “infusoria under the microscope,” lowly as monkeys and lemurs or hapless as the dodo, or like the unfortunate Tasmanians who were “entirely swept out of existence in a war of extermination waged by European immigrants, in the space of fifty years.” We think we’re masters of nature, but, as a young species on a young planet, we’re deluding ourselves.

Humanity’s unwillingness to seriously consider that we might be inferior leaves British society unprepared to face the Martians. The night before it all goes to hell, the narrator sits down to his “last civilized dinner”, and comments to his wife that “if the worst comes to worst” and the aliens are hostile, lobbing an artillery shell at the capsule will take care of the problem. Later on, when the Martians are attacking the countryside and disrupting railway schedules, the as-yet unaffected Londoners complain about the government’s “incapacity to dispose of the invaders without all this inconvenience.”

This is a brilliant twist on a common theme of the future war stories of the era, many of which were making a political point about Britain’s lack of military preparedness relative to the Prussians — a kind of Victorian “missile gap.” Wells discards the political point and makes a cosmic one. (Though this changed in his later, overtly political novels.)

SURVIVAL OF THE FITTEST
Once it becomes clear just how bad things are, civilization breaks down. Wells lays out a searing and prescient vision of the destruction wrought by the Martians, describing scenes of a wasted country and flows of refugees, scenes that would soon become painfully real in Europe, as well as a staple of post-apocalyptic science fiction. Sixteen years before the outbreak of the First World War, Wells wrote this eerie image of Martian gas warfare:

One may picture, too, the sudden shifting of attention, the swiftly spreading coils and bellyings of that blackness advancing headlong, towering heavenward, turning the twilight to a palpable darkness, a strange and horrible antagonist of vapour striding upon its victims, men and horses near it seen dimly, running, shrieking, falling headlong, shouts of dismay, the guns suddenly abandoned, men choking and writhing on the ground, and the swift broadening-out of the opaque cone of smoke. And then night and extinction — nothing but a silent mass of impenetrable vapour hiding its dead. 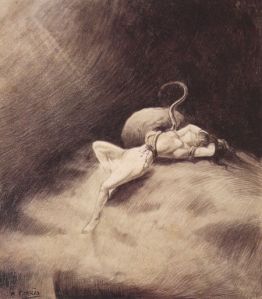 The scenes of destruction are only the backdrop to what Wells is most interested in, the human response. What happens when we’re suddenly forced to fight for our own survival? The post-apocalyptic struggle among survivors is of course a major theme of the genre in the 20th century. War of the Worlds lays the ground for classics like The Day of the Triffids, No Blade of Grass, and The Road of the 1950’s, Wilson Tucker’s awesome The Long Loud Silence.

“And this was the little world in which I had been living securely for years, this fiery chaos!” exclaims Wells’ narrator. What starts out as merely the anticipation of danger quickly becomes an unfamiliar and fatal environment. To his own surprise, the narrator is both ruthless — quickly renting a carriage to get out of town before everyone else has the same idea — and unusually kind. He invites a stranger into his house to quietly share mutton and whiskey in the dark, but he also causes the death of another, whose reckless actions were about to get them both killed.

In the epilogue, the narrator writes that, after the invasion, “the broadening of men’s views that has resulted can scarcely be exaggerated.” The same is true of Wells scientific romances of the 1890’s: The Time Machine and The War of the Worlds broadened the possibilities of science fiction, especially End of the World fiction. The classic image of survivalists making their way among post-apocalyptic ruins is a staple of Cold War nuclear dread, but like so much in science fiction, it owes its origins to Victorian Britain and H.G. Wells.

Image credits: Henrique Alvim Corréa for the 1906 French edition of War of the Worlds.