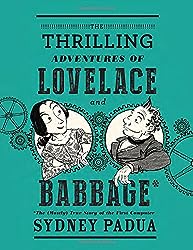 This week we’re learning about a pair of 19th-century geniuses, and the friendship that gave rise to the era of modern computers. We’ll speak to artist and animator Sydney Padua about her graphic novel The Thrilling Adventures of Lovelace & Babbage: The (Mostly) True Story of the First Computer. We’ll also talk to Suw Charman-Anderson, founder of Ada Lovelace Day, an international celebration of the achievements of women in science, technology, engineering, and math.

Don’t forget to support the Science for the People Patreon Campaign to keep the sciencey goodness flowing toward your ear holes.

*Josh provides research help to Science for the People and is, therefore, completely biased.

My copy of Sydney Padua’s The Thrilling Adventures of Lovelace & Babbage is supposed to arrive next week (21 April 2015). I’m a little excited. As regular patrons of The Finch & Pea know, I’m just a little bit of a fan of her work*.

Until then (or until the copy you just ordered arrives), you contemplate the complexity and beauty of the completed analytical engine (if only in Padua’s imagination) at The Guardian.  You can also read about the development of the illustration and the choice of color palette at Padua’s own site.

My daughter’s Caroline Herschel costume is not late for Ada Lovelace Day. We were simply traveling too close to the speed of light relative to the rest of y’all.

If you were the NSA and “asked” Amazon.com for my order history, you would discover that I almost never pre-order anything. I am not an early adopter. I like to let other people sort out the bugs and kinks before wading in.

I said “almost never” for a reason. The exception is Sydney Padua’s new book, The Thrilling Adventures of Lovelace & Babbage, which is scheduled for release in April 2015. The book is based on the adventures of Ada Lovelace and Charles Babbage as described in the webcomic of the same name at 2D Goggles.

Why pre-order? Well, one, won’t you feel stupid if they run out? You will. Two, pre-orders can help those “bestseller” list numbers, depending on the list and how they tally things up. Robust pre-order numbers certainly are good for the author’s fragile psyche. Three, you will probably forget you ordered it by April. So, when it arrives, it will be like Christmas in April – four months late or eight months early, depending on the kind of person you are.

As she is every Ada Lovelace Day, my “Ada” is Jenn Taylor. She doesn’t just talk about inspiring students to become scientists (in their approach to life or professionally), she does it. Every. Single. Day.

Here she is with her Advanced Genetics class. At the request of students (inspired by her college-credit introductory biology classes), Jenn created a college-level Advanced Genetics course at the South Carolina Governor’s School for Science & Mathematics. The material is challenging (I’ve seen the problem sets); but the students rise to the challenge, especially when they are given the confidence that they can handle it and the support when they need a little boost.

I also get to see her the time and effort she puts into recommendation letters, using her reputation and track record to makes sure students have all the opportunity they can handle when they leave her classroom.

Everyday is Ada Lovelace Day in my house.