Today is the anniversary of the discovery of our sentimental favourite dwarf planet, Pluto. On February 18, 1930 Clyde Tombaugh, working at the Lowell Observatory in Flagstaff, found the first evidence of a planet beyond Neptune. This seems like the perfect day to revisit an old post about a song that reminded me of the equipment he used. This is an edited and updated version of a Finch and Pea post from February 11, 2012.

With rich dark wooden curio cabinets and a narrow book-filled balcony accessed by a steep staircase, the Rotunda at the Lowell Observatory in Flagstaff feels like a natural home for the distinguished scientist. I visited the Lowell in 2011 for the National Association of Science Writers meeting, and it was everything that I had always imagined being a scientist would be when I was a kid. Feeling the warm glow of scientific discoveries past, there was one thing in the room I couldn’t take my eyes off: the glass plates and elegant brass eyepiece of the blink comparator used to discover Pluto.

Click, click. Click, click. The blink comparator shifts the view back and forth between two photographic images of the same part of the sky taken several hours apart. The famous plates, taken six days apart, are identical except for one small dot that moves horizontally as the view switches between them. 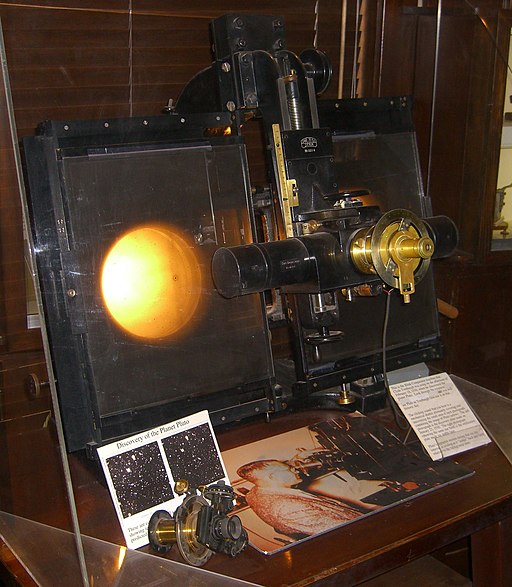 The blink comparator is a beautiful piece of antique science equipment, and it highlights how important patterns and repetition are in science. Repeated measurements can lead to generalized relationships, like equations for describing motion and reactions. Subtle discrepancies in those measurements can point to planets orbiting distant stars. Patterns and repetition, like those created in the blink comparator, are central to making sense of many of the relationships in the natural world.

The Rural Alberta Advantage‘s Barnes’ Yard, from their 2011 album Departing, is a blink comparator song. It’s built on repeated lines with often only subtle changes in between. The narrative builds slowly with a little more given away each time a line is repeated:  All other elements stay in the same place but the one important part comes to our attention because it’s the moving dot. Through the repetition, the words themselves also become part of the percussion, made even more prominent because drummer Paul Banwatt (who rocks by the way) leaves out the complex patterns this time and plays it mostly straight and simple. Given the chance, I’d love to play this loud and ringing off the bookshelves at the Lowell.

Science education researcher and writer View all posts by mcshanahan