Imagine a cross between 826 stores, the Wellcome Collection, makerspaces and the best birthday parties you remember from your childhood. That’s Action Potential Lab. Located in a century-old pharmacy building in Toronto, Action Potential Lab welcomes kids and adults to explore the intersection of art and science. 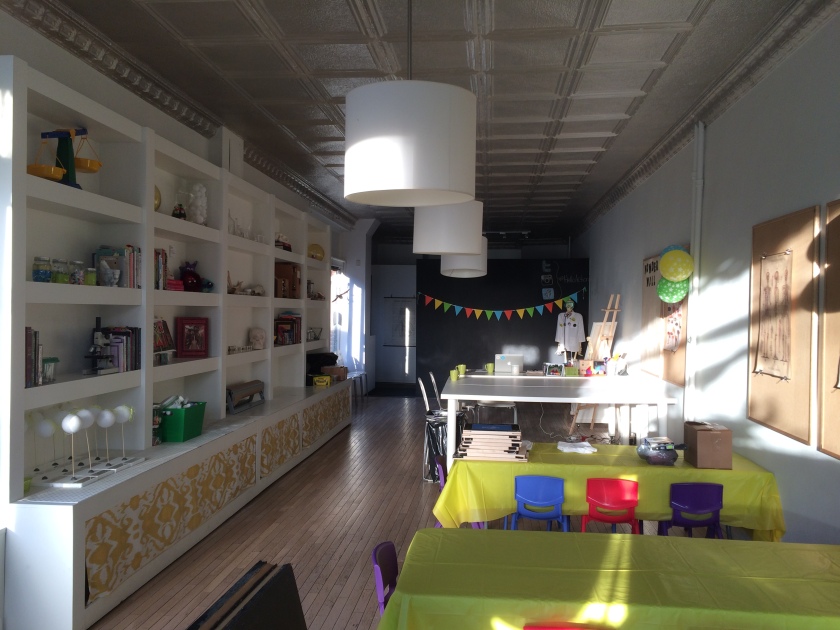 Lisa Carrie Goldberg started Action Potential Lab when she returned to Toronto after eight years studying in Boston and Perth. When I visited Toronto recently, I dropped by the lab to meet her. Even though I was there after hours, Lisa’s day was far from over, and she had to briefly interrupt our conversation to receive some samples for an upcoming thermochromatic dye screenprinting workshop. She had a few minutes for an interview, though:

I was curious how you ended up here. What got you to start this place?

I’m from Toronto originally but went to art school in Boston, where I did interrelated media: everything from film and photography to textiles and glassblowing. That program was really great, because it wasn’t about perfecting one skill set, but rather about concept-based work and learning how to practice as a working artist.

The theme I kept going back to was science in general: Trying to understand the world, or using scientific tools and technologies, but from an artistic perspective. I was doing a lot of work with a microbiology lab across the street from my art school. I made a connection with a professor there at the pharmacy college, who taught me basic microbiology and from that relationship I was left to just do my own work in his lab. That was really one of the most fruitful times, and this became my studio for the last two years of my undergrad. I would present my work to my peers, and they’d be like “Where are you even creating this stuff?”. I’d have mixed different agars and was ordering sheep’s blood though the professor. It was amazing that this could happen! I would have to sneak in at night, because I had to be there when classes weren’t there, but I was given free reign to this lab. It was just incredible.

When I was finishing up my undergrad, and showed my professors the whole catalog of what I’d been working on, they mentioned that there was a program in Perth, Australia, that was bringing scientists and artists together. It just so happened that the professors who started that program were in New York, showing at the Design and the Elastic Mind show at MOMA, so I took the bus from Boston to New York to meet them and was hooked from there.

As soon as I finished my undergrad I went straight to Perth to start my masters in biological art. The program was a bunch of artists working in wet labs. We were housed in the Anatomy and Human Biology department. It wasn’t a medical illustration or anatomical drawing kind of program; it was hands-on work in collaboration with or inspired by science. You would take science courses if you had an art background or art courses if you had a science background, and then you’d find a field that you’re interested in. I thought I would continue doing microbiology, but I ended up getting very excited by the new sleep lab that was being built. It was a research facility that hadn’t even been used for any work yet, and they were willing to let me use it for my own studies. I did my thesis on body positions in sleep, and reflecting that with dancers’ movements. That was really wonderful. 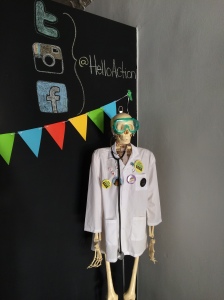 When I came back to Toronto after being away for eight years I started looking for a group of peers that were working in a similar way. There were a lot of amazing initiatives here. There’s Subtle Technologies, which has been around for a long time, and little things were popping up, like DIYbio. A lot of cool and interesting things were happening around science, technology, art and community. But while I was making these connections I realised that, yes, there were these groups of people, but there was no hub. So I thought “what would it be like to create my own hub and bring them all together?”

That became a new journey. In the first few months I was envisioning it like a kind of open source wet lab space. I’d met with DIYbio, and just tried different ideas, and looked for spaces that could house it. Ultimately the realisation was that there should be a space for workshops and classes, and, with finding this location, that’s how Action Potential was formed.

Do you think something like this would have worked in another city, or did it work here because Toronto already had these groups of people that would be interested?

Well, when we started off, me and the others, we were still very new. We were meeting in Hacklab, in a small space off Kensington Market, so it wasn’t like we were part of the mainstream. We were still trying to define what we do. Even MakerKids – another space like mine, but more of a hacking space for kids – were only about one year old at the time, so it was still a very fresh idea. So we still had to convince people that this is worthwhile and different and cool.

At the same time, though, the public school system was starting to integrate this idea of STEAM learning, so that kind of language or concept was already integrated into the education system. Educators were aware of it, so we didn’t have to try as hard to convince the schools that this was important. So it was easy and hard at the same time.

Toronto is also in an interesting time and space where people have a little bit more money to spend on creative endeavors. Anything you can imagine, you can do in Toronto. You’re into gaming? There’s three hackerspaces for gaming, You’re into metalwork and fire? There’s another place for you. So, in answering, I don’t know how successful this would be in a smaller town that isn’t used to such a unique idea. People are more open here, or more aware of new initiatives happening all the time.

That’s not to say that other towns wouldn’t benefit or wouldn’t be excited by something like this. For instance, SymbioticA is in Perth, the most isolated major city in the world! But the professors would often say that they wouldn’t have been able to run a program like SymbioticA in a less isolated mainstream city. We were doing tissue engineering as artists! We had access to a full lab! I’m not quite sure larger institutions in larger cities would be so open to that kind of playfulness.

Other than for kids, you have things for adults here as well?

Yeah, we do kids programming and youth workshops on the weekend and adult workshops on Thursdays or on the weekends. All of those have been such a blast! The ethos is art and science in every program that we do, but we try to offer unique things that they can’t get anywhere else. I think that’s what’s bringing people back again and again.

So what are your future plans for this space?

In the last year and a half we have been trying to see how strange and playful we can get with the adult workshops, and people have been eating it up, so I thought “oh my gosh, I can really let my freak flag fly and test out all the crazy ideas”. For instance, we’ve done a few dissections here, which are really fun. They’re for adults that didn’t necessarily take science in high school or maybe didn’t have a chance to re-engage with hands-on science since high school. We’ve been doing cow eye-ball dissections to learn about sight and how the eye works. We’ve done squid and octopus dissections, followed by printmaking and calligraphy with squid ink. In that workshop we also taught everyone how to make their own DIY specimen preservation, and everyone got to take home a small octopus that they preserved. Taxidermy has been really popular too. We’ve done rabbits and rats, and hopefully birds soon. I think taxidermy is a really good merger of science and art. There’s a craft to it, there’s a science behind it, and it involves techniques for both art and science.

If you’re in Toronto, you can sign up for classes at Action Potential Lab, or drop in during opening hours and see what’s on the shelves! 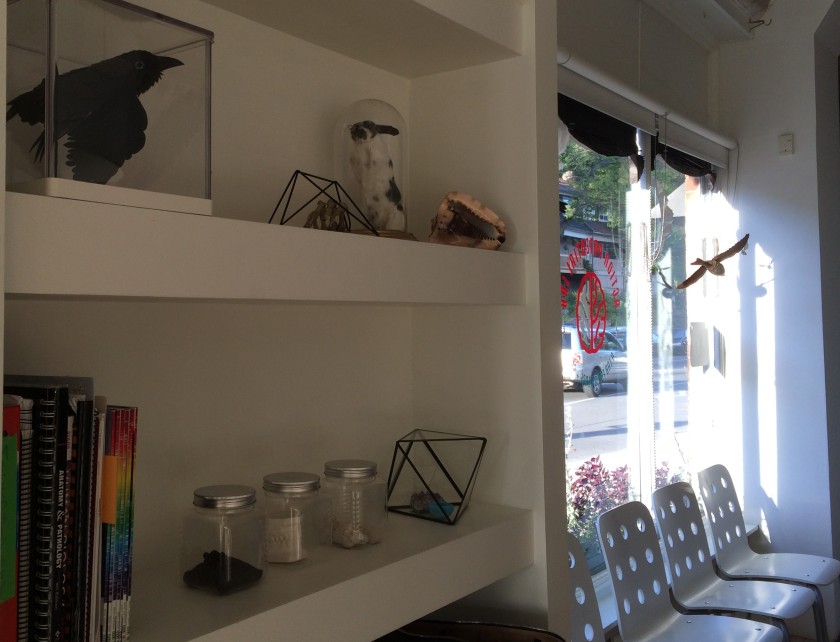