Last week I posted this photo of an animation that was used regularly during the NCAA Men’s Basketball Tournament and asked you to divine which of the multiple problems* bothered me so much. I think I’ve left you on pins and needles long enough.

I am a fan of gravity, which seems to be conspicuously absent from this animation. What is with the slack in the cables (for best results, imagine I’m doing a Jerry Seinfeld impression)? 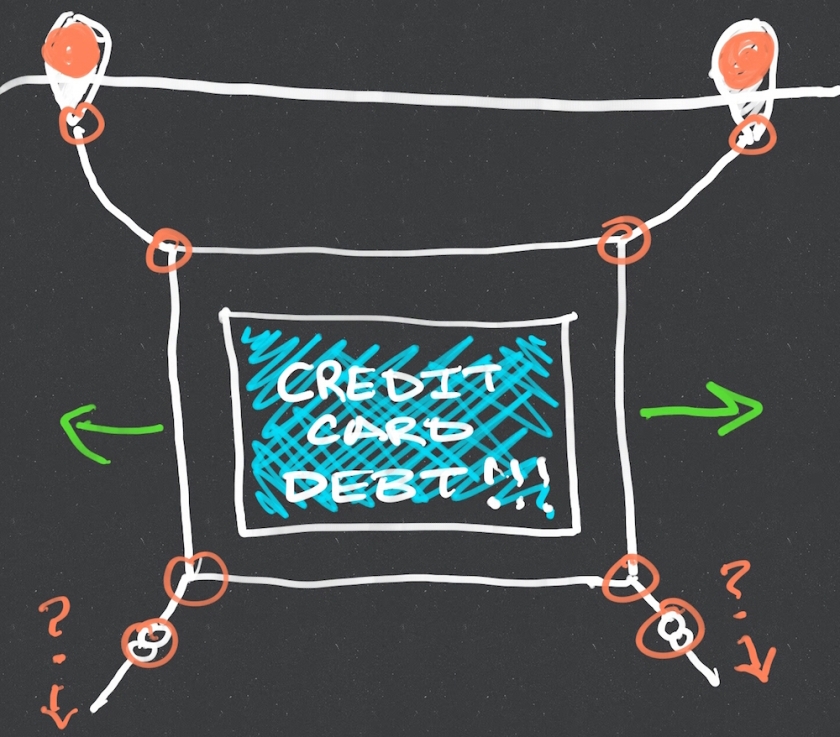 As the pictured screen slides into place it stops and wiggles side to side (green, above) perpendicular to the force of gravity. Virutally all components show some degree of movement around their potential pivot points (orange), indicating that few of these points are fixed and, therefore, are not fully supporting the screen. We also know the screen has some mass because of the momentum induced wiggle.

Gravity pulls down (green, below). Those cables should not be slack (red), but mostly taut (cyan). The connections below should not be perfectly straight (red), but be slightly flexed (cyan). 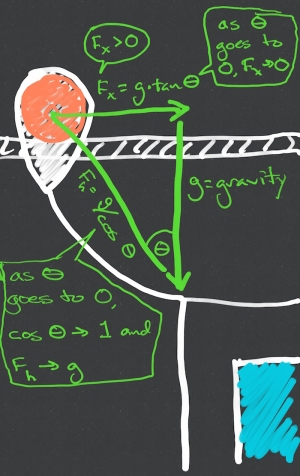 If the wheels on the cable are attached, but not rigidly fixed (allowing the aforementioned wiggle), to the gantry above, they should be angled toward the screen. If they are not fixed at all, they should align themselves above the corners of the screen with some variation due to friction and momentum (and due to trigonometry).

Even if we assume that the screen’s weight is fully supported from below, the screen should be angled either toward or away from the viewer. The direction of tilt would depend on small variations in the screen’s position as it settled. It could, theoretically, align perfectly straight up and down (not leaning), but I’ll let Dr. Ian Malcolm explain to you why this is vanishingly unlikely to occur.

I can identify two options that probably don’t violate the laws of physics. One, the NCAA Basketball Tournament has gone full Space Jam and is being played in the zero gravity of space. Alternatively, the force of gravity could be pointing toward the top of the screen (green, below). Neither of these options explain how the dudes in the background are staying in their seats.

*For example, one might wonder why all the fans in the image behind the animation are white males* shouting their support for athletic teams primarily composed of non-white males. That does bother me, but that issue is not specific to this animation.

**I’m using the scientific definition of cartooning here, which means to create an explanatory drawing to make your point less clear and more obtuse to those who might otherwise criticize your thinking (they get derailed by worrying if they are dumber than your or if you are just being unclear – this is called social engineering and is totally ethical and everything).