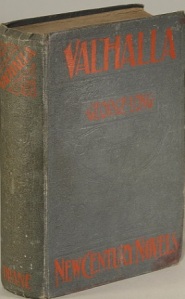 Post-apocalyptic worlds are always haunted. The empty ruins of great cities, the artifacts of lost technologies, the mouldering books, and the memories of the vanished civilization make it clear that the survivors are now living in the world of the dead. In George Long’s Valhalla, the haunting is literal: the world is now one great hall of the dead, with a billion spirits ready to lend their ghostly hands to help the survivors build a better future. While it’s stiffly written and poorly plotted, this short book is nevertheless an interesting artifact from that optimistic time before the First World War. As he describes a new civilization rebuilt under the guidance of the dead from the last one, Long suggests that the root of human dysfunction is simple: jealousy of love and power. Without jealousy, there would be no serious conflict and people will get along just fine.

Like The Purple Cloud, Valhalla is one of those post-apocalyptic books where the world has been almost entirely depopulated, but those who are left don’t really have to struggle for survival. Living in the aftermath of the greatest natural disaster ever, Long’s characters don’t worry about the challenges posed by nature; more threatening are the challenges they pose to each other. The catastrophe itself is a vaguely described series of events that resemble the biblical apocalypse:

It was in the year 19— that there came upon the world a great and vast upheaval of nature, so terrible and far-reaching in its consequences, that it made all the survivors on the earth fear and tremble…The powers of the earth were shaken, though the sun and moon continued to give their light, nevertheless men’s hearts failed them for fear. Something had gone wrong in the world—they knew not what…Throughout the land houses trembled to their foundations, as immense thunder-laden clouds crashed into each other overhead with a dull, reverberating, awful shock. The sea had swept up on the lowlands like a tidal wave, driving men inland panic-stricken.

Eventually famine finishes the job, leaving Henry Lear wandering the country alone. But destiny awaits him, and the invisible hands of the dead spirits help Henry get along without any trouble at all: they saddle up his horse, serve him food, and even run the trains for him. Thanks to the spirits, Henry meets his Eve, a woman named Flora who has also been guided by the spirits. It turns out that there are a few more survivors, and they start a small community near Henry’s farm.

I’M JUST A JEALOUS GUY
With just a handful of people, the options for pairing off among the survivors are limited, and jealousy poses the first (and pretty much only) major challenge. A Lieutenant Miles kidnaps Flora with the aid of the spirits and tries to force himself on her. Henry, with the aid of the spirits comes to the rescue. Henry and Miles fight a duel; the evil Miles loses but noble Henry refuses to kill him. Miles then rides off, in the typical fashion of a romance from this era, with a stilted vow of revenge:

Miles sprang to his horse. “You should have killed me,” he said. “You will regret your magnanimous folly one day,” and with an evil look he rode away at a gallop.

The spirits complicate the love conflicts in the book. They are like Aladdin’s genie — they fulfill wishes, but those wishes have unintended consequences. The spirits also refuse to help after there has been bloodshed. Flora learns this after Miles returns and she kills him in self-defense; for awhile, the survivors have to get by without their supernatural servants. Much of the book’s plot is driven by the problems caused by conflicting wishes and seemingly fickle behavior of the spirits. 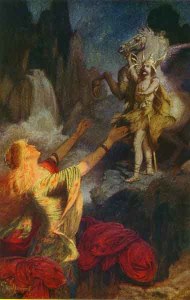 But even when the spirits withdraw, the survivors don’t struggle with nature or revert to barbarism. There is just a continuation of the kind of barbarism that plagued the earlier world. There are more jealous lovers, kidnappings, and deaths, all mostly following the same pattern as the episode with Miles. The other source of jealousy is power. It turns out that several million people survived the end of the world in New Zealand. Those New Zealanders substantially outnumber the survivors in Britain, and New Zealand’s ambitious governor sees this as an opportunity to seize all of England’s wealth and become dictator of the world. Conflict ensues, spirits are involved, and in the end, of course, good triumphs over evil.

Valhalla isn’t subtle. There are good people and bad people, with few in between. Illness and scarcity don’t really pose much of a problem in the post-catastrophe world. Thanks to the spirits, modern technology still works. Long is focused on the common theme that human nature is the real problem: even with a chance to start again, assisted by supernatural forces, bad people will screw things up, and good people have to resist them. Henry is the classic good guy recognizable in many later post-apocalyptic novels (he’s the clear predecessor of Ish in Earth Abides or Randy in Alas Babylon): a reluctant leader of the fledgeling community who nevertheless gets the job done when duty calls. The spirits of the dead, which communicate only through their actions, also make some feeble attempts to steer humanity towards moral rectitude, but Long doesn’t develop this angle very much. Valhalla isn’t particularly original, but it’s another example of the appeal of a post-apocalyptic setting to writers who want to explore what ails civilization.

Read Valhalla at the Internet Archive.