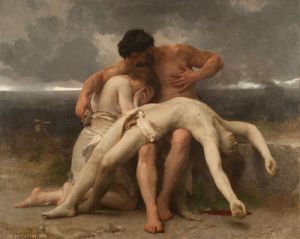 Not all post-apocalyptic fiction is about death. That might seem odd, given the high death toll in this genre. But most of it is about something else, like nature, war, technology, civilization, or even religion. Mary Shelley’s The Last Man is an exception: it is a book about death.

And death is what saves it from being just another 19th century door-stopper, doomed to bore contemporary readers. Shelley did what, as far as I know, no other writer in the genre has done. She turned her personal grief into the End of the World. In the Last Man, the deaths of her husband, her children, and her friends are transformed into the complete extinction of the human species.

In the years leading up to the book, Mary suffered a string of personal tragedies. In 1816, her step-sister committed suicide. While living in Italy in 1818-1819, she and Percy lost their two young children. Then in 1822, Percy was drowned in a shipwreck. Lord Byron, with whom Mary had a troubled but close friendship, died in 1824, when Mary was already working on her novel.

BRINGING THE DEAD BACK TO LIFE…
Most of The Last Man is taken up with Mary’s recreation of her close friends and family. Set in England in the late 21st century, it features a set of main characters who form close bonds of friendship:

– Lionel Verney (representing Shelley herself), who with his sister Perdita (a mixture of Mary and her step-sister Claire) are the orphans of a disgraced friend of the former king;

– The children of that king (who abdicated in 2073 in favor of a republican government): Adrian (representing Percy Shelley) and his sister Idris.;

– Evadne (one of Byron’s mistresses), a Greek princess.

There are friendships, philosophical discussions, and love triangles within triangles. Adrian loves Evadne, who loves Raymond, who at first wants to marry Idris (loved by Lionel) but instead falls for Perdita.

Shelley’s late 21st century is not that different from the 19th. People travel by carriages and steamships, and sometimes by balloon. And of course, crucial in a plague novel, there are no antibiotics. The major geopolitical conflict is the long-running one between Turkey and Greece. Without a King of England, the political drama centers around who will be Lord Protector. (At one point it’s Raymond, who had aspired to be king.)

The small band of friends try to make a better world with their Romantic ideals, but in this novel of disillusionment, their plans never come to fruition and things fall apart. Raymond, married to Perdita, unexpectedly reconnects with Evadne, then pursues a self-destructive course that leads to his death in the plague-stricken war ruins of Constantinople. This is followed by Perdita’s suicide, and Evadne’s death in battle.

…ONLY TO HAVE THEM DIE AGAIN
At this point, Lionel’s world begins to unravel. The plague begins in far-off lands, something not too unusual in Shelley’s time. But now it’s unstoppable as it sweeps the world. Plague arrives in England; there are skirmishes with refugees from America, there are religious revivals, and people start to live for the moment. In practice, the collapse of civilization doesn’t sound so bad:

The theatres were open and thronged; dance and midnight festival were frequented — in many of these, decorum was violated, and the evils, which hitherto adhered to an advanced state of civilization, were doubled. 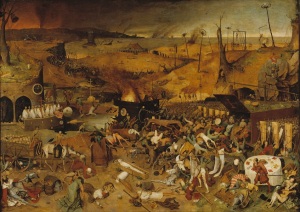 But this book isn’t about the collapse of civilization. It’s an elegy, a drawn-out — very drawn-out — lament for lost loved ones, and a reflection on the pointlessness of humanity’s ideals and great works in the face of utter extinction. There is no comfort of an afterlife. God is absent as everyone Lionel loves dies off. Shelley’s very personal and utter hopelessness is striking, and it wouldn’t be matched in post-apocalyptic fiction until On The Beach in 1957.

Adrian and Lionel lead an exodus from England, to avoid starving over the winter. Along the way they encounter a fundamentalist preacher going on about sin and punishment: “Do we not all die through your sins, O generation of unbelief, and have we not a right to demand of you repentance and obedience?” Adrian blows him off.

Eventually only four people are left: Adrian, Lionel, Lionel’s son Evelyn, and his orphaned niece, Clara (named for Shelley’s own dead daughter). They visit the scenes of Shelley’s happier days in Switzerland and Italy, until sickness takes Evelyn. Then Adrian and Clara drown, like Percy Shelley, in a shipwreck. Lionel washes up on the shore, alone in the world.

Lionel wanders the empty streets of Rome among the dead monuments. He begins to write his history:

O worn and beating heart, may I dissect thy fibres, and tell how in each unmitigable misery, sadness dire, repinings, and despair existed? May I record my many ravings — the curses I hurled at torturing nature — and how I have passed days shut out from light and food — from all except the burning hell alive in my own bosom?”

The book ends as he sets off in a boat for St. Petersburg, writing that “neither hope nor joy are my pilots — restless despair and fierce desire of change lead me on.”

The Last Man, like many books of that era, can be a bit of a slog for a modern reader. Mary’s very personal expression of grief, which she blew up to the dimensions of human extinction, makes it worth the read. While there is rich material for fans of the Romantics, it is also a crucial early work of post-apocalyptic science fiction, one that comes at this popular genre from a vantage point that is still fresh today.