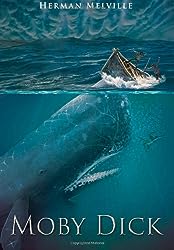 I know that title doesn’t sound right…or does it.

Thanks to a tweet by Jimmy Stamp that was retweeted by Alexis Madrigal, I found this delightful post by Robin Sloan entitled “The Moby Dick Variations” that speculates about what it means to be a novel as a unique work of art. In the post, Sloan investigates how a novel can vary and still maintain its identity. The post instantly connected to two divergent thoughts in my brain.

While Sloan’s post deals with minor variations to Moby Dick (e.g., translating into German, adding a sex scene, altering the ending), it made me think about larger variations. I’m talking about stories that are thematically connected. One might say that they are the same “story”, but one would never say that they are the same “novel”. I was thinking, in particular of Haisam Hussein’s map tracking the evolution of four stories, which we have featured before on The Finch & Pea. One of the mapped stories  is the Leviathan story* including Moby Dick.

The second thought was sparked by the choice of image to accompany Sloan’s article, which is a picture of Tristin Lowe’s Mocha Dick sculpture, which our Michele Banks featured in May. Mocha Dick was a legendary, albino, sperm whale that is credited as the inspiration for Melville’s Moby Dick. In Sloan’s piece, the whale awaits our judgment on the possible variations in the book. Lowe’s art was born out of a desire to reckon with the true size of a mythical beast.

This conflation of disparate threads keeps me thinking. The (until recently) unfathomable depths of the ocean hide many amazing creatures. Think of the variation of those wonders. Then think of the variation in their descriptions from the different individuals who encounter a specific animal. Add the variations introduced by human creativity and error over time.

Combine all those possibilities together…one story – the giant from the depths – infinite tales.

*I’m quite fond of mythology involving the “chaos dragons” of the primordial waters representing the primal forces of nature – and how cautious we should be about the consequences of engaging them in battle.