The Baldwin Steps in Toronto are nowadays probably best known* as the stairs featured in Scott Pilgrim, but they also have an interesting geological history.

At the end of the last Ice Age, a sheet of ice prevented water from Lake Ontario from flowing out toward the sea (via the St Lawrence River, featured in my whale post from a few weeks ago). As a result, the water level was a lot higher. All of downtown Toronto used to be under water. 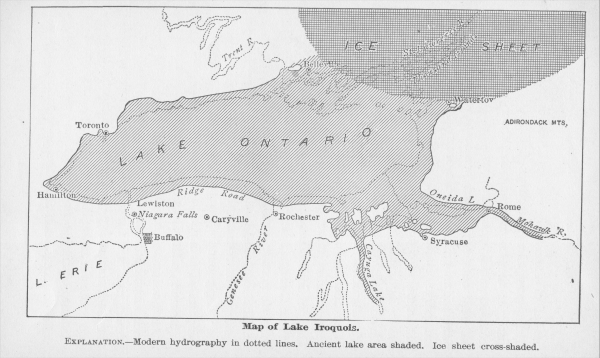 The Ice Age lake is called Lake Iroquois. In the area that is now Toronto area, its shores were about 2 km further inland from where they are now. The Baldwin Steps are built along the old shoreline: climb the steps, and you’re making your way out of the old lake.

At the top of the steps, a plaque reads:

Directly below you are the 12,000-year-old shorecliffs of the great glacial Lake Iroquois, formed during the last ice age. Twenty-three meters high, this is the steepest part of the old bluffs running through the city just below St. Clair Avenue. All of Toronto below this point was once under water.

When the Ice Age ended, the water level went down to where it is now. Around this same time in history, ice sheets dropped big boulders into Algonquin Park.

I used to live near the bottom of the steps, just a few streets down from where Lucas Lee explodes in Scott Pilgrim vs The World, after being dared to skate down the railing:

*Even though Scott Pilgrim performed disappointingly at the box office, it has become a bit of a cult classic.

One thought on “Baldwin Steps: Climbing Out of an Ice Age Lake”