In the summer of 1854, the central London neighbourhood of Soho was struck by a sudden cholera epidemic. Local physician John Snow identified the Broad Street pump as the source of the outbreak, preventing further spread of the disease. These days, the affected neighbourhood is home to many pubs and cake shops, prompting my friends to organise a “cholera and cake” pub crawl with out-of-town visitors this past weekend.

The Broad Street pump is not longer there, but in 1992 a symbolic pump was placed across the street from the John Snow pub, which is thought to have been the original location of the pump.

Locating the source of the cholera epidemic was an especially impressive feat because the prevailing medical opinion at the time was that cholera was caused by “bad air”, and not by something you can find and eliminate. Germ theory hadn’t yet caught on, but John Snow was skeptical of the “bad air” theory, and suspected that there was something else.  He talked to lots of people in the affected area and in neighbouring streets, and he started to notice a pattern.

In a letter to the Medical Times and Gazette, Snow wrote:

“I found that nearly all the deaths had taken place within a short distance of the [Broad Street] pump. There were only ten deaths in houses situated decidedly nearer to another street-pump. In five of these cases the families of the deceased persons informed me that they always sent to the pump in Broad Street, as they preferred the water to that of the pumps which were nearer. In three other cases, the deceased were children who went to school near the pump in Broad Street…”

The correlation between the deaths and the location of the pump became especially apparent when Snow mapped the deaths. 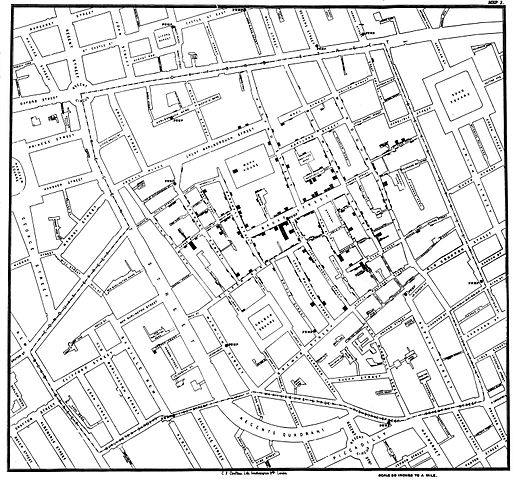 He managed to convince the local authorities that the pump was the source of the cholera outbreak, and the next day the handle was removed from the pump.

Snow’s map is often used as an example of data visualisation – where new information appears by showing data in a particular way. We used the map to find pubs. There are a lot of pubs in Soho, but we narrowed down our choices by overlaying the map of local pubs and cake shops with the 1854 cholera outbreak map, and chose only infection hotspots. That didn’t always work….

.@LouWoodley : “There’s *no* cholera in this pub!” @ficaryl: “What? I refuse to drink here!” #choleraandcake

We found several pubs in cholera hot spots, but on Snow’s original map, there was a different correlation between cholera and beer. Once he had mapped the locations of the outbreak, he found a gap: a place where there *should* have been cholera, but there was none. It was a local monastery, where the monks didn’t drink water from the Broad Street pump, but only homebrewed beer. Drinking exclusively beer protected them from the cholera outbreak, so what better way to commemorate the Soho cholera epidemic than with a pub crawl! 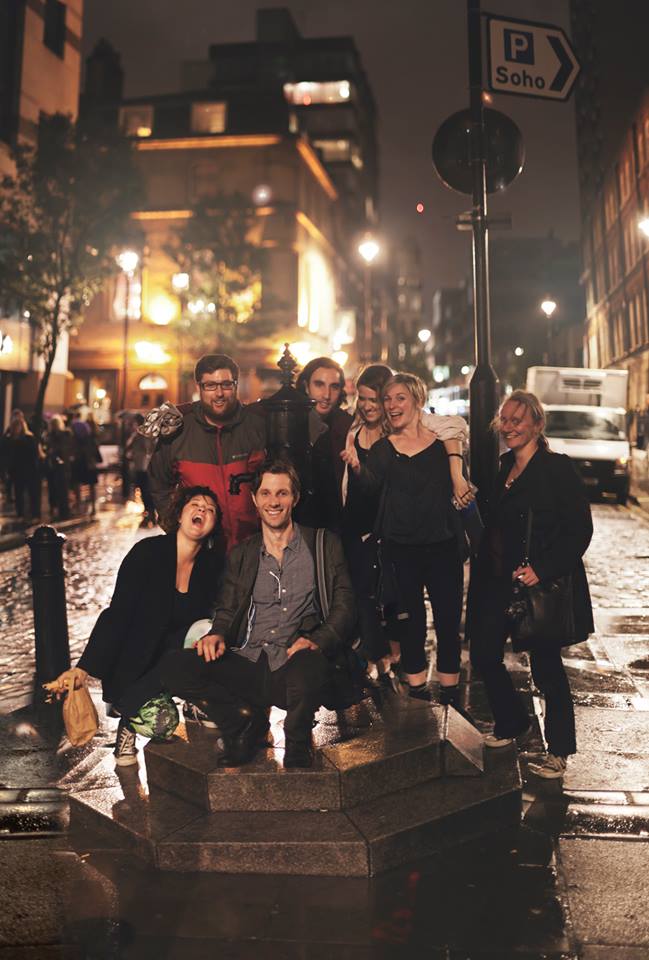 (Group photos at the pump taken by Jim Caryl. Other photos by me.)

4 thoughts on “John Snow and the Broad Street Pump”