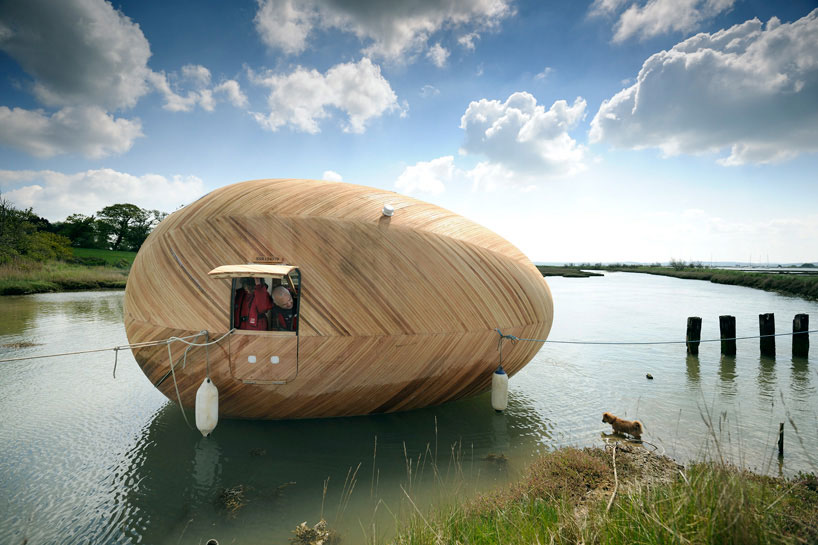 Living in a pineapple under the sea is so 2010. Artist Stephen  Turner recently took up residence in a wooden egg on the River Beaulieu in England, where he will stay for about a year.  The Exbury Egg, Turner’s new home, is a solar-powered wooden pod which is tethered like a boat in an estuary, rising and falling with the tide.

The main idea of the Egg is to explore “a more empathic relationship with nature” linked more closely with the rhythms of natural life.  However, the project does not reject modern technologies but rather seeks to use them in the most effective possible way.  For instance, Turner has a computer and phone powered by solar panels.

The Egg itself is a thing of beauty  (you can see photos and video of its construction here), designed and built to withstand the elements but also to become weathered by them, unlike a metal or fiberglass vessel.

Climate change is already creating new shorelines and habitats. Established salt marsh is being eroded by a combination of rising sea levels and falling landmass and the entire littoral environment is in a state of flux. The implications for wildlife and for the flora as well as for people are challenging. Raising awareness of the past and the unfolding present of a very special location will be the task, whist living in an ethical relationship with nature and treading as lightly as possible upon the land.
-Stephen Turner (source)

Stephen Turner is writing a blog about his experiences in the Egg   and there is an extensive program of seminars and educational events related to the project, which runs through July 2014.

3 thoughts on “The Art of Science: The Exbury Egg”