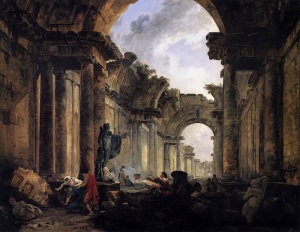 Darwin’s argument for evolution by natural selection gets a lot of attention as the science bombshell of the 19th century that shocked the sensibilities of Victorian society, but there was an equally consequential, if less dramatic, scientific development that took place much earlier in the century, a development that left a deep impression on the generation before Darwin: William Herschel’s discovery that the universe is much bigger and much older than nearly anyone had imagined.

William Herschel’s scientific findings, made with his ever larger telescopes, were a frequent target of Romantic poets’ imaginations, and towards the end of his career, Herschel’s speculations about the past and future of the cosmos fed Romantic angst over the role of God and humanity in what now seemed to be a jaw-droppingly vast cosmic stage.

Among Herschel’s more disturbing ideas is the notion of a natural end to the Milky Way. As Richard Holmes notes in The Age of Wonder, Herschel jarred the poet Thomas Campbell by explaining that the night sky was filled with “many distant stars [that] had probably ‘ceased to exist’ millions of years ago, and that looking up into the night sky we were seeing a stellar landscape that was not really there at all. The sky was full of ghosts.”1

In a paper written in 1814, “Astronomical Observations Relating to the Sidereal Part of the Heavens, and Its Connection with the Nebulous Part; Arranged for the Purpose of a Critical Examination,” Herschel wrote about the death of the Milky Way, arguing that the galaxy itself was a chronometer counting down from the beginning to the end:

We may also draw a very important additional conclusion from the gradual dissolution of the milky way; for the state into which the incessant action of the clustering power has brought the present, is a kind of chronometer that may be used to measure the time of its past and future existence; and although we do not know the rate of going of this mysterious chronometer, it is nevertheless certain, that since the breaking up of the parts of the milky way affords a proof that it cannot last for ever, it equally bears witness that its past duration cannot be admitted to be infinite.

The snuffing out of our world, as just one extinction of millions in an indifferent universe, is the setting of Lord Byron’s post-apocalyptic poem, ‘Darkness’. Desperate scenes of violence and suffering are flanked by cold images of an empty cosmos that continues on, unperturbed. The Romantic concerns about the end of the world and “Man’s Place in Nature” are the forerunners of books like Earth Abides, The Road, and the enduringly popular genre of post-apocalyptic fiction.

1. Richard Holmes, The Age of Wonder: How the Romantic Generation Discovered the Beauty and Terror of Science (2008), p. 210.

Image: Hubert Robert, Imaginary View of the Grand Gallery of the Louvre in Ruins (1796)