Originally posted on 17 May 2012, we are reposting this piece to make sure you are adequately prepared for The Walking Dead to return from hiatus on AMC Sunday, 10 February 2013 at 9PM (ET). We’ll have a third post in this series for you on Saturday. 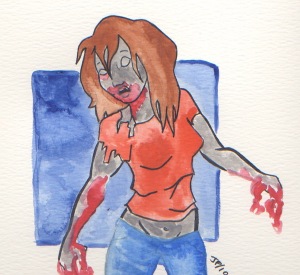 . . .we discussed how incredibly unlikely it would be that Rick would be the only available blood donor for Carl among the group of survivors on Hershel’s farm1. This led us2 to wonder what the blood type of his mother, Lori Grimes, might be. It is not at all unusual for a parent to not be a compatible donor for their child, especially for a direct transfusion. Lori is pregnant and her blood type could be important to the health of the wee baby Grimes (WBG).

We know that Carl is Rh+. If Lori is Rh- and was exposed to any of Carl’s blood during that pregnancy or birth, that exposure may have primed her immune system to generate antibodies against Rh+ blood. If WBG is Rh+, it may suffer from Rh Disease. Normally, Rh disease is prevented by treating the mother with antibodies against the Rh protein that causes the reaction. These antibodies eliminate the offending fetal blood cells without allowing an immune response and subsequent immune memory to be triggered. Unfortunately, it is pretty clear that standard medical practices are not available in the post-zombiepocalyptic of The Walking Dead. Is Rh disease yet another peril with which the WBG will have to cope?

We already know that both Rick and Carl are A+. We also know that Rick was the only compatible donor for Carl. Therefore, Lori cannot have either of the compatible blood types A+ (genotypes: AA++, AA+-, AO++, AO+-) or A- (genotypes: AA–, AO–). She also cannot have the B+ genotypes BB++, BB+-, or BB– because those would not allow Carl to have an A+ phenotype. We have already eliminated half of the possible blood genotypes for Lori.

Both Rick and Carl must have one of the genotypes that lead to an A+ phenotype (AA++, AA+-, AO++, or AO+-), but they do not have to have the same genotype. Based on my calculation of allele frequencies from Hardy-Weinberg principles, AO+- is most likely to be Rick’s genotype among the 4 possibilities.

If Rick is Rh heterozygous (+-; 59.6% chance), then WBG has a 50:50 chance to be Rh+ even if Lori is Rh-. We could calculate the odds for each of the 9 remaining blood genotypes for Lori, but we can do even better. We can calculate the likelihood of each of those 9 genotypes based on allele frequencies while factoring in that Rick and Carl are both A+.

And, being screenwriters with God-like authority over our fictional universe, let’s say we rig things so we know Lori is Rh-. How likely would it be that WBG is Rh+?

Pretty likely (69.5%). The overall risk that Lori will be Rh- and the child will be Rh+ (the situation necessary for Rh Disease) is about 10% (red).

That does not mean that the odds of Rh Disease is 10%, as the disease is dependent on several factors (primarily prior exposure to Carl’s blood). While 1 in 10 is not exactly likely, it’s not exactly unlikely either.

And, our characters already live in a pretty improbable world. Hey, Season 3 writers, sound like a plot point to you? It would give you a reason to send the gang back into a zombie infested hospital. You can have that one for free (Creative Commons Attribution-ShareAlike License).

Or the baby could be Shane’s. I hope not, because, then, this was just a colossal waste of time, pie charts, and population genetics.

*Illustration provided courtesy of the lovely and talented Jill Powell.

1. Here is a brief tutorial on ABO/Rh blood types from The Walking Dead’s Bloody Mess:

In the ABO system, each individual has two versions of the ABO gene. These versions can express either an A antigen, a B antigen, or no antigen at all (O). This gives rise to the four possible ABO types in which the individual expresses only A antigen (A), only B antigen (B), both A and B antigens (AB), or no antigen (O). The Rh system actually considers many different antigens, but we focus only on the D antigen, which is important for predicting certain risks like hemolytic disease of the newborn. If an individual expresses this antigen, they are considered Rh+ for blood donation purposes. If they do not, they are Rh-.

2. I’m assuming that I’m such a great writer that you are all incredibly motivated to follow me down this rabbit hole.

One thought on “The Walking Dead’s Bloody Mess 2 [repost]”