I’ve lived in Cambridge, UK, for the past three years. There are many things I don’t like about Cambridge (and I’m leaving soon) but that only makes me more appreciative of the few places I do like very much, and one of those is the Sedgwick Museum of Earth Sciences.

The Sedgwick Museum is one of the museums of the University of Cambridge. It’s located on one floor of the Department of Earth Sciences, right in the centre of town. The collection of fossils and rocks is on display along two corridors, in imposing cabinets. 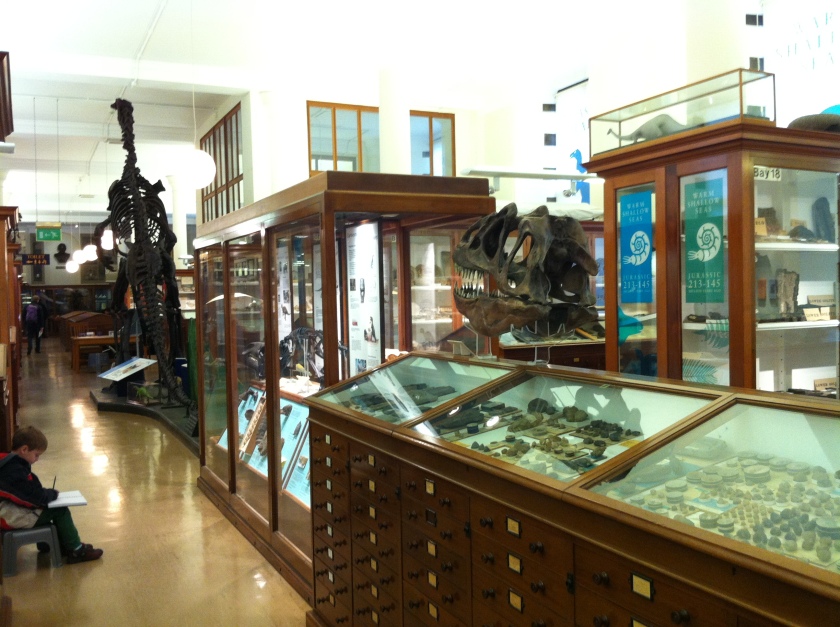 This could easily have been a terribly boring setup, but the museum has managed to make the most of the small space, and turned the entire museum into a geological timeline! You enter the museum in the Cretaceous Period (65-145 million years ago), and if you turn right you can walk all the way back in time to the Cambrian explosion, 500 million years ago. Along the way, you can see fossils from all over the world.

I normally turn left when I enter, past the Ice Ages, all the way to the very end of the timeline. There, in a simple display case just like the others, are some of Darwin’s original notebooks with rock specimens from the Beagle. We now tend to remember Darwin mainly for his contributions to biology, but he was hired on board the Beagle to help with the geological exploration of the lands that they visited. The Sedgwick Museum has an entire section dedicated to Darwin’s geological work, but I really just like seeing the notebook with “C. Darwin” written in it. 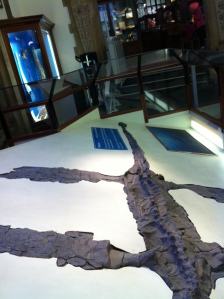 Some of the museum’s treasures are too big for the display cases. There are four huge skeletal fossils. Two mammals, toward the end of the timeline, a dinosaur near the entrance, and a plesiosaur in the Jurassic corner. The plesiosaur is not stable or complete enough to be shown on it’s own, so it’s flat in a cast, and doesn’t properly fit on a photo.

I’ve taken several visitors to the Sedgwick Museum. It’s not the most obvious stop for tourists to Cambridge, but you can do all the main tourist stuff within a day, and if they stay longer they’re often up for something slightly quirkier – like Darwin’s notebooks and some skeletons.

Despite having been to the museum several times, I couldn’t find any of the photos I took on previous visits, so I popped in again this weekend just to take these, because that was quicker than searching my entire hard drive. There were lots of mothers with kids that day. Some were sitting in a corner reading some of the books from the kids’ book area, others were playing with the geology games, or opening the secret drawers in the cabinets. One little boy was sitting on one of the available little stools and carefully drew the skeleton in one of the displays. (See the top picture.) It’s that kind of museum. It’s quiet, but full of awesome things.