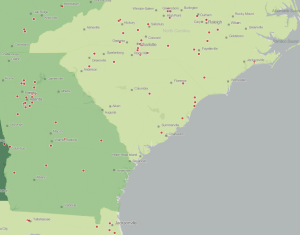 Now that I live in South Carolina, I get asked “how do I like it there?” a lot. This usually code for “how do I like living in a rural, cultural backwater?” This is somewhat fair, as the Civil War did start here, but not exactly accurate. Like all things involving interactions between people, it is complicated. I could try to convince them that South Carolina is not what you expect with personal stories and character references.

Instead, I’m just going to point to the data from FloatingSheep.org documenting the spate of racist tweets surrounding Obama’s reelection that showed that South Carolina only ranked 24th (of 51 – DC was included) in tweeted racism. Not ideal, but better than many would expect. For comparison, my home state (Ohio) ranked 23rd*, the state where I went to college (North Carolina) ranked 19th, the state where I went to graduate school (Missouri) ranked 8th, and the nation where I did my post-doc (UK) isn’t exactly sure if they have ever seen a black man before (92.1% white).

So, yeah, its OK living here.

I also like NASCAR (Tony Stewart, thanks for asking). So, that helps too.

Note that the results are based on a pretty small set of racist tweets <400. So, they should be taken with a big grain of salt.

*From looking at the data tables, I think Ohio and South Carolina are technically tied.