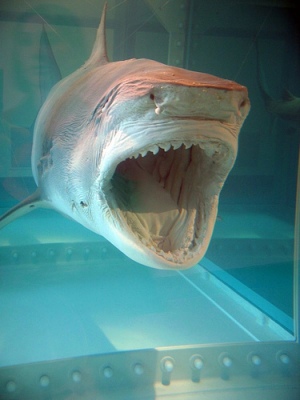 Sharks are scary. The apex predators of the ocean, they have giant mouths with rows of pointed teeth, they can grow to a great size, and they never stop moving. And yet, according to the National Oceanic and Atmospheric Administration (NOAA), more people are killed by electrocution by Christmas lights than by shark attacks.  (source) So our fear of sharks isn’t rational, it’s cultural.  Artists, take note: If fear is what you’re going for, put a shark on it.

Damien Hirst made one of the most iconic pieces of art in the last 30 years by suspending a 14-foot tiger shark in a tank of formaldehyde and calling it The Physical Impossibility of Death in the Mind of Someone Living.  The New York Times called Hirst’s shark “simultaneously life and death incarnate” – motionless, obviously dead, but still a threatening, menacing presence.

Hirst’s real shark (the original fish eventually decayed and was replaced in 2006) has its mouth open to display those cruel teeth. In contrast, French artist Xavier Veilhan creates sharks out of steel sheets folded like origami, taking away all but the scale and the familiar silhouette of the predator. They’re still scary. This could be the perfect piece of art for the lobby of a hedge fund. 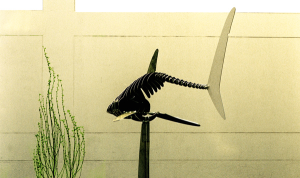 In Cape Town, South Africa, artist Ralph Borland has recently created an installation of “ghost sharks” alluding to the fact that the area was under water centuries earlier. Borland’s sharks are even more stripped-down than Veilhan’s, only skeletons with fins, but they are equipped with sensors that make them move in response to people passing by. The sight of a shark sculpture “coming to life” might entrance some onlookers, for others, it might just be enough to scare them off that square forever.

One thought on “The Art of Science: Put a Shark on It”