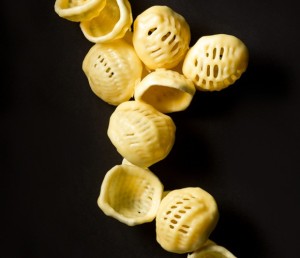 Courage Unmasked, an art exhibit at the Katzen Art Center in Washington, DC, consists of 59 sculptures incorporating radiation masks previously worn by head and neck cancer patients.  Each radiation mask, made of plastic mesh, is heated and fitted individually to the patient prior to treatment so the head and neck can remain perfectly still, allowing the radiation to be precisely directed and avoid damage to healthy tissue.  Not surprisingly, many patients who have used these masks never want to see them again. “Some people run over them with cars,” noted artist Jessica Beels, one of the organizers of the exhibit.  But some donated theirs to be turned into works of art, which in turn will be auctioned off to support other cancer patients.

The original idea for Courage Unmasked came from Cookie Kerxton, an artist who was diagnosed with cancer of the vocal cords in 2008. She asked the radiation technicians what people did with the masks when they were finished with treatment. Told that most people either discard or destroy them, she decided to gather some unwanted masks and ask her artist friends to decorate them. Many artists joined in, and in 2009, the first Courage Unmasked art auction raised over $100,000 for Kerxton’s fund, 911 4 HNC (Help for Head and Neck Cancer). The money does not go to research but directly to individual patients who are struggling to make ends meet.

The sculptures in Courage Unmasked range from very simple to highly ornate.  Lorrie Fredette, in her piece Loud & Clear (shown above), boldly cut up and reconfigured the mask. She explains:  “Most of us use our voices as our primary form of expression. Loud & Clear, influenced by normal larynx tissue, is its metaphor. The sculptural arrangements of elements are an interpretation of the piling up, the proliferation of healthy cells. The three primary materials used dovetail with the intention of the work. The plaster bandage, a material known for fixing broken bones, sets the mended cells. The thermal plastic mask is transformed into a multitude of healthy cells. Beeswax historically has been used to preserve tissue samples, and for this piece is preserving the renewed well-being.” 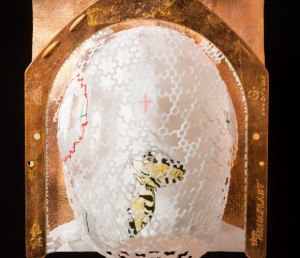 By contrast, Breath, by Beverly Ress, left the mask much more intact, but with subtle changes suggested a both a sense of transformation and the devotional aura of an icon.  In her words: “I began by pulling the frame of the mask forward into a kind of Renaissance wimple. I cut open the mouth and began to imagine breath—the primal force of life. I attached an intaglio print of a butterfly that I had made several years ago. It is a reminder of breath and lends a skin-like translucency to the piece.”

All of the sculptures can be seen here.  More information about the event is here.