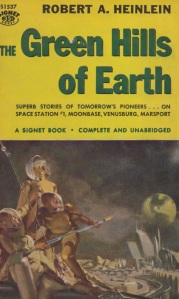 Unfortunately, many classic sci-fi writers are widely famous for works that serve as a poor introduction to their writing. After reading Stranger in a Strange Land, I didn’t get why people found the author of such overbearing verbiage so compelling. Philip Dick’s A Man In the High Castle on a first read was enjoyable, but it didn’t blow me away. C.M. Kornbluth’s Not This August seemed like a generic work of 50’s Cold War angst.

Eventually I figured out what’s so great about Philip Dick and Cyril Kornbluth, and now I’ve had my Heinlein epiphany. Stranger in a Strange Land was unpersuasive and bloated (I mistakenly read the uncut version), but the free love and naked hippie Martian religion kept it somewhat interesting. Farnham’s Freehold was entertaining and biting in its social satire, but the characters and future society were a little too ridiculous. Orphans in the Sky is an exemplary juvenile Heinlein, but I’m no longer into The Hardy Boys or Encyclopedia Brown, and Harry Potter was good for just one read through the series. The juvenile Orphans was tolerable only for its historical interest.

So it was with some trepidation, despite the cool vintage cover art, that I opened up the story collection The Green Hills of Earth, featuring a set of Heinlein’s Future History stories. My misgivings quickly melted away, because in these stories Heinlein is at his hard SF best.

Heinlein’s Future History tales describe the realization of humanity’s manifest destiny in space. Heinlein works through the social implications of space colonization, and most importantly, he describes the character of those people who carry out the physical acts of exploration and colonization. The kinds of people who colonize the moon, chart out the most navigable space routes, erect the first space stations, and eke out a living from the Venusian soil are men, almost always men, of action and honor, of practical instincts, not fearless but in control of their fear, who are willing and competent to get the job done. (Think Ed Harris, Tom Hanks and Kevin Bacon in Apollo 13, or rather their real-life counterparts, Gene Kranz, Jim Lowell and Jack Swigert.)

From this grand vision spring a set of remarkable hard SF stories about men who don’t lose their cool when the atomic pile goes bad on a space cruiser or when a mail rocket crash traps them in a partially finished tunnel on the surface of the moon. The occasional woman, if she’s competent at what she does, gets Heinlein’s respect, as in “Delilah and the Space Rigger”, a story about the first woman to work on site at the construction of a space station. The deeper layer here is that these people who build humanity’s future in space are exactly the kinds of people Heinlein believes made our modern world possible, the people who first circumnavigated the Earth, who broke trails through uncharted mountain ranges, who colonized new continents, and who built the technological triumphs like the transcontinental railroad and the Golden Gate Bridge. And thus Heinlein’s Future History stories are essentially an optimistic vision of our past, a view of a species that is destined to continually push beyond present limits, as long as we keep producing those hardy souls who just get it done.

These stories are tightly plotted and executed, with a well-imagined technical realism that undoubtedly was helped by Heinlein’s technical background and experience in the Navy. In contrast to the van Vogt-style stories of super-science that were popular in 30’s and 40’s pulps, Heinlein’s stories acknowledge that the practice of science and engineering is the art of the soluble, heavily constrained by the demands of nature, and not a set of magical techniques to make all your problems disappear. This aspect makes Heinlein’s hard SF very compelling, and after reading these stories I’m not surprised that he became one of science fiction’s most influential authors.

Of course there is the incendiary side of Heinlein. Because he has such strong opinions about the characters of those who conquer our frontiers, Heinlein’s characters tend to fall into one of two categories, the go-getters and the shmucks, which is an excessively binary way to classify people. And women are less likely to have what it takes than men – in these stories many women are at their best in the role of the stoic pioneer wife, uncomplaining and not holding their men back despite fears for his safety. (I shouldn’t overstate this issue – Heinlein does feature women with the Right Stuff, but fewer of them.) There isn’t much to say about this: it’s frustrating, but with a few notable exceptions like C.L. Moore, science fiction in the 30’s and 40’s was the preserve of men and boys.

If you’ve never read Heinlein and are looking for an entry point, start with these stories. Go read these stories knowing that Heinlein was well known as a walking contradiction, but one who was capable of rigging up some of the tightest plots in the field, someone who understood what hard science fiction should really be about, and one with an unusually fruitful imagination who never ran short of ideas or words to describe them.

5 thoughts on “I now understand why people like Robert Heinlein…”