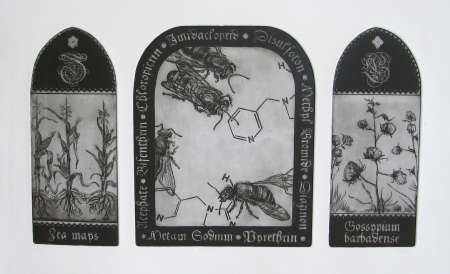 This week’s science art piece, The Great Demise of the Pollinators , an etching  by Nils Henrik Sundqvist, highlights a widely-known but poorly-understood environmental emergency – the huge, world-wide decrease in the numbers of pollinators.  In Sundqvist’s own words:

“Pollinators—most often bees, butterflies, birds, and bats—who transfer pollen from one flower to another are critical to fruit and seed production. In fact, animals provide pollination services for over three-quarters of the staple crop plants that feed humankind, and for 90% of all flowering plants in the world.

Neonicotinoids, a class of insecticides which act on the central nervous system of insects with lower toxicity to mammals,  are among the most widely used insecticides worldwide, but recently the uses of some members of this class have been restricted in some countries due to a possible connection to Colony Collapse Disorder (CCD),  which is the result of the European honey-bee populations collapsing.  Lobbyists and spokespeople for the German chemical company Bayer, the producer of the pesticide Imdacloprid, are disputing such claims, while other scientists and activists blame these exact companies for destroying important links in our food chain.”

The  traditional triptych form of this print is reminiscent of  a church altarpiece. Says Sundqvist:

“The center piece has several pesticides listed in an old fraktura script similar to a a Northern Renaissance altar or book script. The images on the left and right are corn and cotton, widely used crops for mono cultures and part of the problem.”

Sundqvist’s work is on display at Artomatic in Arlington, Virginia through June 23. You can see more at his website.