I get unsolicited mail:

ProEvo: Pro Evolution – Guideline for an Age of Joy

Being on a variety of evolution vs creationism mailing lists, I wasn’t initially surprised to receive an apparently evolution-related book in the mail. I’d never heard this author, someone going by the name of Tomotom, so I flipped to the back cover to see what this thing was about.

There I found the most prestigious set of anonymous blurbs I’ve ever encountered on a book cover. A number of famous people and institutions went on record endorsing this book. Prof. Dr. L. K. (world-famous scientist) called ProEvo “an incomparable guide,” while a “large country’s institution for press, books, films, television and radio” argued that “the author should make the book available everywhere – so many people would be helped.” University Professor Dr. J.H. put it simply: “This book is great,”, while physicist Dr. H.D.W suggests that “the book may be a catalyst for the process of human renewal.” 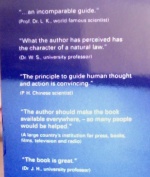 I had never heard of the author, who appeared to be named Tomotom. Yahoo! Answers was no help (“Who the hell is Tomotom Stiftung?”). The author bio inside the book managed to, amazingly, be even more anonymous that the cover blurbs:

The author (1911-2001) studied first agriculture and then economics. He had a successful career as a business man and business consultant. In search of the origin and meaning of existence, he discovered in the 1950’s a new, simple and reliable guideline for human thought and action. This guidline is oriented on cosmic evolution. Scientists have termed it the “evolutionary ethic.”

This idea of a “new, simple and reliable guideline for human thought and action” sounds like a lot of the 50’s sci-fi I’ve been reading, except probably not as fun, unless this book turns out to be some long lost story of Jorge Luis Borges.

I’m sure I’ll have more to say as I explore these guidelines for an Age of Joy, but for now, I’ll leave you with just a little nugget of Tomotom’s wisdom, which I wholeheartedly endorse:

A person’s anti-evo goals and behavior disturb the stream of life in him and in his environment, and thereby produce unhappiness, discord, restlessness and harm.

Wow. That just ranks right up there with Lao Tzu.