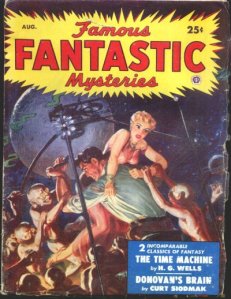 With H.G. Wells, science fiction left behind the 19th century and fully entered the 20th. During the new wave of future fiction published in the late 1800’s, writers came up with many of plot lines, settings, and themes that characterize modern science fiction, but it wasn’t until H.G. Wells wrote his rock solid classic, The Time Machine, that SF actually became modern. Chronologically, it’s the first book of science fiction that, to me at least, doesn’t feel obsolete.

Why? The Time Machine, after all, has scenes inspired by 19th century culture: seances in late Victorian drawing rooms and class anxieties of turn-of-the-century Britain. Wells’ radical innovation was to do away with restrictions of scientific plausibility — which ironically let him tackle the intersection of science and human society with more depth than any writer before. Jules Verne, whose classics now feel very dated, wasn’t happy with Wells’ technique:

I make use of physics. He fabricates. I go the moon in a cannon-ball discharged from a gun. There is no fabrication here. He goes to Mars [sic] in an airship [sic], which he constructs of a metal that does away with the law of gravitation. That’s all very fine, but show me this metal. Let him produce it.

In other words, as Kingsley Amis put it, Wells “liberated the medium from dependence on extrapolation and in so doing initiated some of its basic categories.” Extrapolation is obviously still an important element of the genre today, but Wells showed how to do it without chaining one’s imagination to the boundaries of the science of the day. By giving the imagination freer rein in science fiction – by fabricating freely – Wells could better explore the human implications of science.

***SPOILER NOTE: It’s 2014. The Time Machine has been a classic for more than a century. There will be spoilers.***

SOMETHING IS HAPPENING HERE
There is so much that can be said about this awesome classic, but in this series we’re interested in the End of the World. I’ll pass over Wells’ innovations in the time travel genre, his interesting spot at the nexus of mainstream and genre fiction and what that meant for the development of British SF, and his ironic take on Victorian spiritualism.

Much like Camille Flammarion’s Omega (and later, the works of Olaf Stapeldon), The Time Machine presents a vision of the grand arc of future human evolution and the eventual death of the earth. The main character, known only as the Time Traveller, has built what we’d now call a steampunk time machine, which he uses to visit the year 802,701. When he first arrives, it appears that humans have turned the earth into a new Eden. The climate is warm, the landscape lush, and all microbes have been eradicated. Humans seem to be living in a permanent state of youthfulness, frolicking in this garden world without any care for their survival. Nothing appears to disturb their pursuit of pleasure.

If you’d been reading this book in 1895, this depiction of the world in the 903rd century would look like the glorious outcome of technological progress and social Darwinism. Technology has completely freed humans from nature, flawlessly meeting all of their needs. Humans themselves have evolved into a form of perfect beauty and perpetual youth. This is the storyline taken by Flammarion two years earlier, and it was what the social Darwinists of the day expected after all of the unfit traits in the human species had been weeded out.

But Wells turns this optimistic view into a nightmare. The Time Traveller soon realizes that the beautiful, garden dwelling humans, ironically called Eloi, are essentially low-IQ cattle, fed and fatted by a second species of human, the subterranean Morlocks. The Morlocks run the machinery that keeps the world of the surface dwellers going, and at night they emerge from their tunnels to round up a few Eloi for dinner.

THE BRIEF DREAM OF THE HUMAN INTELLECT
The Time Traveler sees that humanity “had committed suicide.” The ultimate state of humanity was a “rigorous punishment of human selfishness.” The Eloi were descended from the upper classes, who, by turning “steadfastly towards comfort and ease” evolved into beings who had lost their intelligence and ability for self-preservation. The exploited lower classes had been forced to live and work underground, eventually developing into the ruthless, cannibalistic Morlocks. “Man had been content to live in ease and delight upon the labour of his fellow man, had taken Necessity as his watchword and excuse, and in the fulness of time Necessity had come home to him.”

Wells, a one-time student of the great evolutionary biologist T. H. Huxley, wrote the first novel to wrestle seriously (if not particularly realistically) with the implications of evolution. After leaving the 903rd century, his Time Traveller visits an even more distant future, long after humanity has disappeared. He finds that what was once a London suburb is a desolate beach on a twilight world, weakly illuminated by a dying sun. Humanity is not on a course of steady progress — rather than being the ultimate conquerors of nature who eventually transcend their material existence, humans and their intellectual achievements are merely a brief blip in the course of the world. The Time Machine was the bleakest End of the World vision since Mary Shelley’s The Last Man, and it’s rarely been surpassed since.