Long-time readers know I’m a fan of post-apocalyptic science fiction, because it reveals so much about our feelings toward science and its place in civilization. Science mediates between us and nature; in modern civilization, we rarely encounter the raw power of nature without science’s buffering effects.

But are we like the sorcerer’s apprentice, putting the world at risk by playing with powers that are out of our league? Have we used science to truly transcend nature’s casual brutality, or are we just kidding ourselves? How much does our own human nature depend on the scientific underpinnings of civilization, and what happens when science’s support is yanked away — will it be Mad Max-style battling warlords, or pastoral communities in tune with nature’s rhythms, as in Earth Abides?

In End of the World fiction, the answers to these questions are all over the map, and that’s why this genre is so awesome.

I’ve already covered post-apocalyptic SF from the 40’s and 50’s, but it’s time to go back to the beginning of the genre, with the very first book that you could call a Dying Earth science fiction novel: The Last Man, by the French priest Jean-Baptiste François Xavier Cousin de Grainville. Published in 1805, it’s a bizarre rewrite of the Book of Revelations as futuristic Gothic novel, filled with temples, spirits, visions, and trans-Atlantic airships.

When you write a story about the last human couple, there’s a problem: who tells the story? Adam and Eve had descendants to tell their story, but how would anyone know about the last man? Grainville solves this with a framing story: An unnamed, present-day narrator is traveling to see ruins in Syria, where he walks into a cave, and, in the style of John the Revelator, he encounters a Celestial Spirit. The Spirit tells him to write down a vision he will see of the last man, who “will have no descendants who can know and admire him. My desire is that before he is born, he will be known in memory. I wish to celebrate his struggles and his victories over himself – to tell of the pains he will suffer to shorten those of humanity, to end the reign of time, and to hasten the day of eternal recompense that awaits the just.”

The story itself is a fascinating mess, filled with tales within tales, temples, battling spirits, prophet-scientists, heavenly signs, and tests of faith. What it boils down to is this: the Earth is dying, and along with it the now-infertile human race. Earth and humanity can only be saved if a chosen man, Omegarus, and a chosen woman, Sydaria, get together and have sex.

The catch is that God doesn’t want them to, because the Earth has now reached the end of its allotted time. Just as with Adam and Eve, there’s a Deceiver — the Spirit of the Earth, who will do anything to avoid dying himself with the end of the world. He’s trying to get Omegarus and Sydaria together, while Adam, brought back to earth after millennia of being forced to watch his progeny tossed through the gates of Hell, has been assigned to keep them apart. Omegarus and Sydaria fall in love, various prophecies are fulfilled, and in the end, Omegarus has to make a fateful choice: obey God and abandon Sydaria to die, or follow his passion and foul up the sequence of events that are supposed to lead to the Last Judgment. I won’t spoil the ending, but I’m sure you can guess the ultimate outcome. The author was a French priest — God always wins in the end.

SCIENCE: AN ABUSED GIFT OF GOD 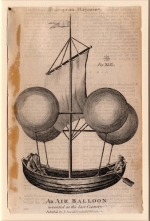 What’s especially fascinating about The Last Man is the big role for science in a very unscientific world. Grainville’s Catholic world is not that of the Deist Age of Enlightenment; it’s much closer to the medieval cosmos of Dante. Supernatural forces abound. And yet it is through scientific achievements that humanity reaches a utopian state:

Matured by bitter experiences, the human race took giant strides along the road to perfection. Humankind seemed to have reached the highest level of perfection, when a man appeared whose genius made them wonder if he could be a god in human form. His name was Philantor. His predecessors had conquered nature by steadfast dedication to their investigations… All other philosophers had done no more than raise the veil of nature. Philantor exposed her naked to mortal eyes.

Philantor (and yes, everyone in the future has ponderous names like this) comes up with something that sounds like nuclear energy, followed by his greatest triumph: an elixir of extreme longevity, which is carefully doled out only to the most worthy. All of major scientific figures in the book are scientist-prophets, pious men (and only men) who glorify God. But they also take too much from nature. “Never satisfied” with her fruits, they became “spendthrifts with their power and squandered their inheritance.”

Paradoxically, later in the book we’re told about the true source of scientific invention. The great engineering projects, the large airports, the airships that capable of rounding the globe powered by “volatile spirits that could carry men above the clouds more powerfully then the sails of ships,” the invention of an almost limitless source of energy: none of these are due to “human inventiveness,” but rather gifts on the sly from the Spirit of the Earth. This Spirit has a great laboratory in the center of the planet, filled with “the sap and seeds of plants and the various essences of animals.” It was really this Spirit who “interrogated nature and compelled her to answer him.” The Spirt has built up giant cache of explosives, which go off toward the end of the book, blow the Earth out of its orbit, and help initiate the Last Judgement.

Grainville’s weird mixup of Biblical drama and science-filled future fiction is a trip. In its own unusual way, it captures some key themes of the End of the World genre, including the role of science as a major player in a morality tale. The Last Man is a fun read from an odd little corner of early science fiction.