I’ve been busy lately, as you may have noticed by my lack of posts. I desperately need a vacation, but since that’s not an option, I can look at some of my favourite photos of previous vacations. Like this photo of sunrise at Uluru:

Uluru is the iconic enormous rock that sits all by itself in the middle of the Australian desert. It looks so imposing and out of place that you can’t help but wonder how it got there. Australia’s indigenous people have had explanations for the rock for ages, all involving spiritual stories. Both a government website and the site of the local tourist resort are unable to share those tales, though, because the stories are restricted by sacred rules. Luckily for us, geologists are more forthcoming with their interpretations about the origin of Uluru, as well as the neighbouring rock formation Kata Tjuta.

About 500 million years ago, the area around Uluru and Kata Tjuta wasn’t a desert, but a sea. It’s hard to imagine the sea at all when you’re in the middle of a huge desert, about a day’s journey away from the closest coast. 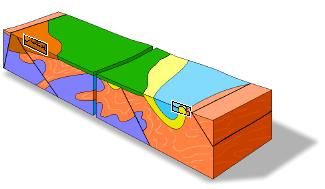 When the sea receded, the rock layers below started folding, and when the sandier layers eroded over time, the edges and bumps of some of the underlying layers became visible. Uluru is the edge of a rockslab that extends for several kilometers underground. The stripes are the layers that would normally be horizontal (and underground). Kata Tjuta are folds in the rock layer that have been pushed upwards.

The geological explanations are probably not as entertaining as the origin stories that the local population have about Uluru and Kata Tjuta. When I visited there were a few that were pointed out: large animals crawling over the rock, for example. But as far as scientific explanations go, this one is also pretty amazing, I think!

And don’t forget to check out our Have Science Will Travel map: