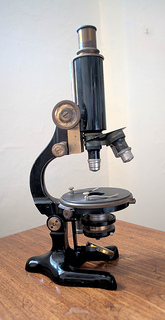 If you can’t see something, how do you know it is there? In my research, I rely on my ability to take pictures of neurons making connections with each other and other types of cells. What I know to be the truth about these connections, is based on only what I can see through the microscope. I was reminded just how little we can actually “see” by a recent paper in the journal Science.

This new paper used newer imaging technology called STORM (STochastic Optical Reconstruction Microscopy), which enhances imaging by only exciting and imaging a few individual fluorescent molecules at a time. This prevents groups of fluorescent molecules from distorting fine detail by forming a large bright fuzzy cloud. The Harvard scientists saw that a structural protein, Actin, actually forms rings around the axons of neurons.(!) Up until now, the organization of actin in the axons and dendrites has been a mystery.

Imaging is limited by the diffraction of light and conventional microscopes are only capable of resolving a certain amount of detail. A large effort resulted in the development of new imaging technology that increases the level of resolution we observe. These simple biological facts have just been waiting to be seen and we couldn’t see the rings for all the fluorescent haze until now.